The combination of Stochastic and MACD indicators is quite popular and there are a lot of “fans” of this strategy. We have tested the Stochastic + MACD strategy on three types of markets to understand how it’s going to behave itself. Take a look on the results and decide will you use it or not!

Do you know what the MACD + Stochastic strategy is?

Stochastic + MACD strategy – is a combination between the Stochastic and MACD indicators that theoretically complement one another. Many traders determinate this strategy as a cross-functional strategy that can be used on different states of market volatility.

Stochastic indicator is one of the most popular indicators and it is in widespread use in technical analysis. Comparing with other indicators it is known as a simply using indicator.

The stochastic oscillator is calculated using the following formula:

C = the most recent closing price

L14 = the low of the 14 previous trading sessions

H14 = the highest price traded during the same 14-day period

%K= the current market rate for the currency pair

What does it mean?

How does the MACD indicator work?

The MACD indicator (or "oscillator") is a collection of three time series calculated from historical price data, most often the closing price. These three series are: the MACD series proper, the "signal" or "average" series, and the "divergence" series which is the difference between the two.

The MACD series is the difference between a "fast" (short period) exponential moving average (EMA), and a "slow" (longer period) EMA of the price series. This indicator was invented in 1979 by Gerald Appel as a tool for setting the time for stock market. Using this indicator as a predicting tool is not so popular.

What about time periods?

To describe our results better, we will show you our sum of profit results on each type of the market.

Entering and exiting the deals:

We receive a “sell” order signal when:

So the main point is to have the negative meaning of MACD indicator and at the same time the Stochastic Oscillator lines should cross above the oversold zone. It means we have the “sell” type of order.

For the “buy” order the requirement is the opposite: 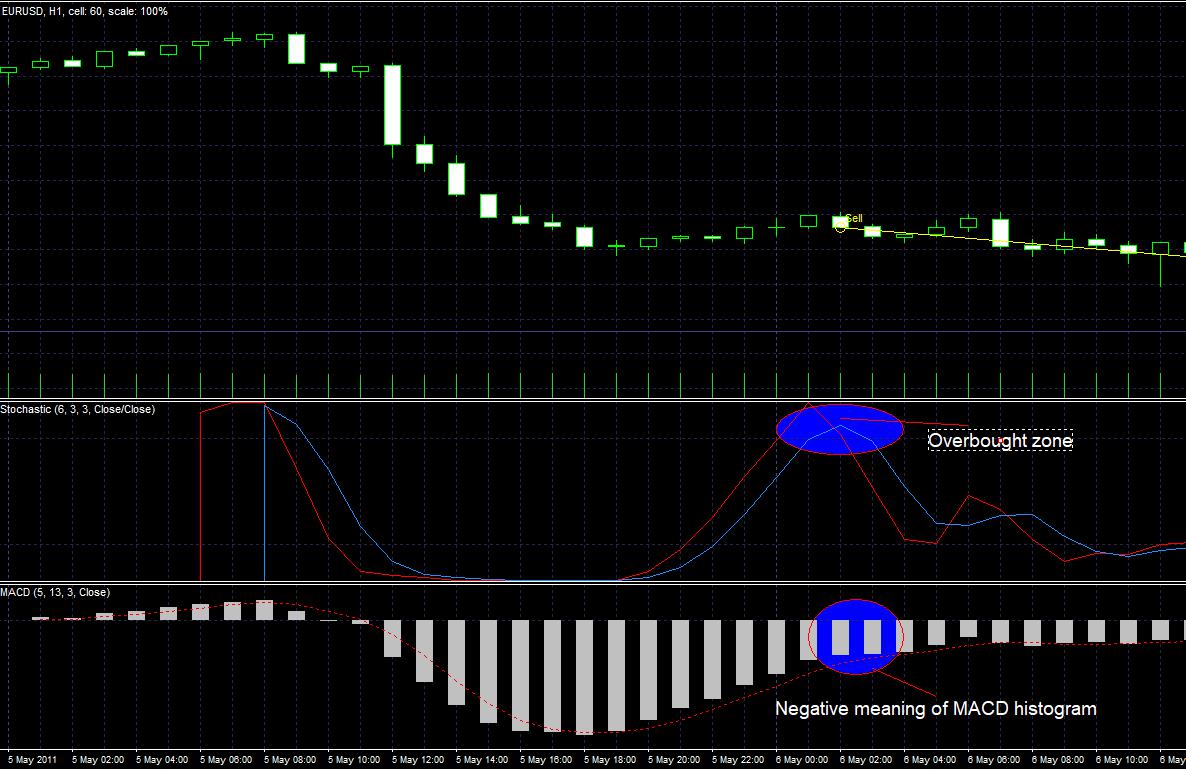 To describe how the “buy” type of the order comes out take a look on the picture below. 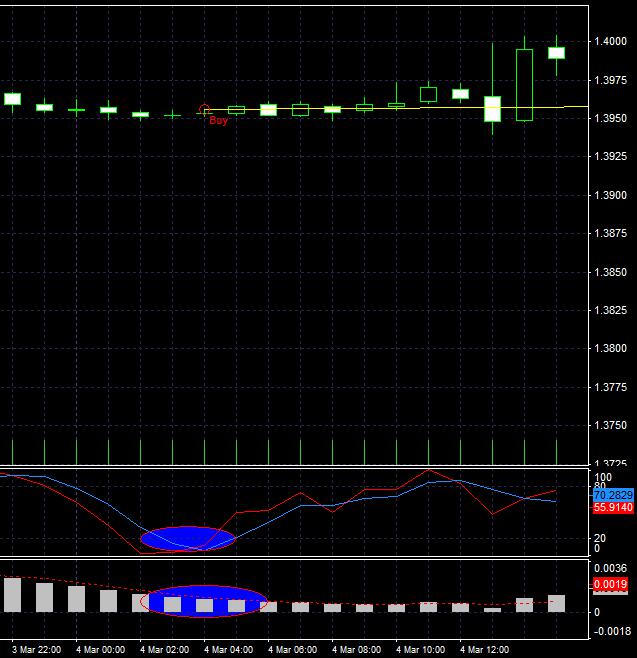 The Stochastic Oscillator lines cross at the overbought zone and MACD histogram has a positive meaning. And we close the deal when one of these conditions stops working.

There’s a strong opinion that using the of MACD + Stochastic strategy can be affective but on the other hand this strategy is a bit controversial.

As you can see on the results we would not recommend using this strategy on Bullish and Bearish types of market.

On the other hand, looking on the results of forward testing set on the flat type of the market we can see that MACD+Stochastic strategy showed its worth with the result +273.9 pips.

On the Bullish market during the training testing set of the MACD+Stochastic strategy the result was detrimental and the testing set finished with inconspicuous result. And the result of the Forward set is absolutely negative so we cannot recommend using this strategy on this type of market.

The same situation on the Bearish type of market. The result of Forward testing set is absolutely negative comparing with the negligible result during the training testing set. So, we would not recommend using this strategy on this type of market with given conditions.

To check this (or any other) strategy’s performance you can download Forex Tester for free. In addition, you will receive 22 years of free historical data (easily downloadable straight from the software).