Making money with CHF: stability is much more expensive than gold

Tiny Switzerland has not only large-scale industrial production, raw materials and energy resources (except for hydropower), but also serious labor potential. Nevertheless, the country of reliable banks shows unique economic stability, and even during periods of global crises does not allow any serious economic «failure». The Swiss Franc effectively uses the economy of the «center of Europe» country and its non-aligned status.

For the first time, the Swiss Franc was introduced as the official payment unit at the end of the 18th century in the Helvetic Republic, and the modern version of the CHF the world saw in 1850. Then its value corresponded to the rate of the French franc, and the volume of the national currency was only 15% of the entire money supply.

Today in Europe, only the Swiss currency is called the «franc». Swissy acts as the currency of Switzerland, Liechtenstein, and also in the Italian exclave Campione d’Italia.

Switzerland’s insurance and pension system are regarded as optimal. Agree, only a very self-confident economy can seriously consider the social idea of a guaranteed «unconditional» income for every citizen in the amount of ₣2500 (although the general referendum on June 5, 2016 did not support this topic).


Even though the CHF share of world currency reserves is less than 0.3%, the franc is actively used as a reserve currency. Confidentiality of client accounts is a «source of strength» for the Swiss financial system, but the status of the euro as a freely convertible currency, of course, «made life difficult» for banks.

Today, the European Union is putting pressure on the franc policy and demands more active measures to control the circulation of «dirty money» and tax evasion.


However, CHF assets continue to be used as the currency of offshore zones − as a rule, in deposit and investment operations. The decline in security has led some countries, such as Singapore, to try offering complete banking secrets to capital. However, according to unofficial data, over 30% of offshore funds are securely «hidden» in the vaults of Swiss banks. 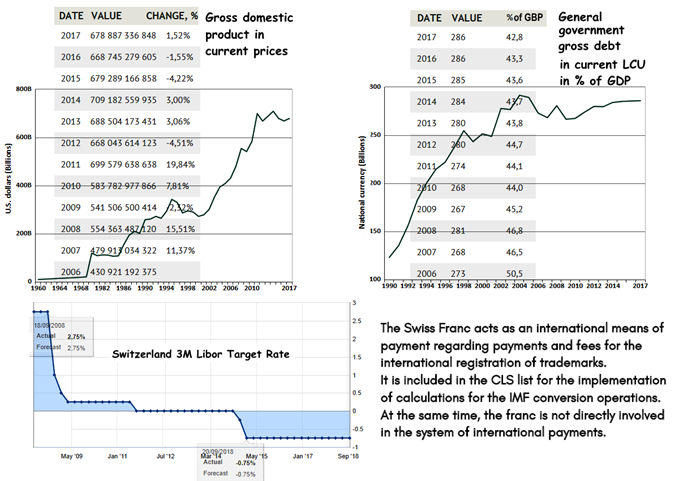 Switzerland is a member of ЕFTA, European Council, OSCE, OECD, IBRD, IMF and UN. For the past 300 years, Switzerland has been neutral and does not participate in military conflicts and military alliances, which is the most crucial principle of the country's foreign policy.

The main fundamental factors are the policy of the central bank, labor market statistics, export volume, consumer spending, as well as the specificity of capital movements in the global market.

An effective monetary policy, an active market for services, especially commercial insurance, the pharmaceutical and food industries (recall Nestlé and Barry Callebaut), and the high-tech industry provide the country with a constant flow of investment. 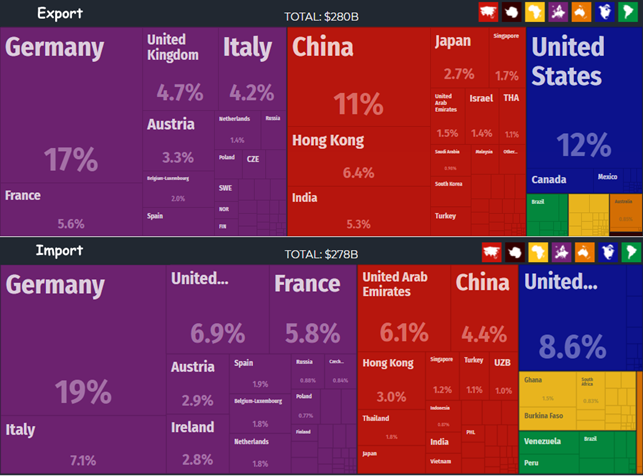 Switzerland is forced to buy the whole range of industrial raw materials, but profits from the banking sector successfully compensate for the constant excess of imports over exports. Exchange in Zurich is the most important platform for the circulation of securities and foreign exchange transactions.


A severe devaluation of the franc (about 30%) was recorded only once − in 1936, during the Great American Depression. Modern investors are also taking money to Switzerland to save the capital during periods of instability.

In essence, it leads to an appreciation of the franc, even if there are no obvious conditions for economic growth.

Swiss National Bank has a commercial structure; it is a joint-stock company with a capital of about ₣50 million. Approximately 55% of its shares belong to public institutions (municipalities and regional banks). Shares of SNB are freely quoted on the stock exchange, but only Swiss citizens, Swiss companies, or companies with base offices in Switzerland can own shares.

The SNB has a zero or negative policy to stimulate labor productivity and inflation. Financial figures do not abuse verbal intervention, but global negative factors in the banking sector can cause a sharp weakening of the franc.

The legislative link between gold and the Swiss currency was abolished in May 2000, but even today, the government guarantees a 40% security of the currency with gold.

Trading CHF assets (mainly CHF/JPY, EUR/CHF and USD/CHF) occupy approximately 5% of volume on Forex. Due to the low discount rate and the status of the reserve currency, the Swiss Franc is actively used for carry trade operations and hedging risks. The current USD/CHF rate depends on: 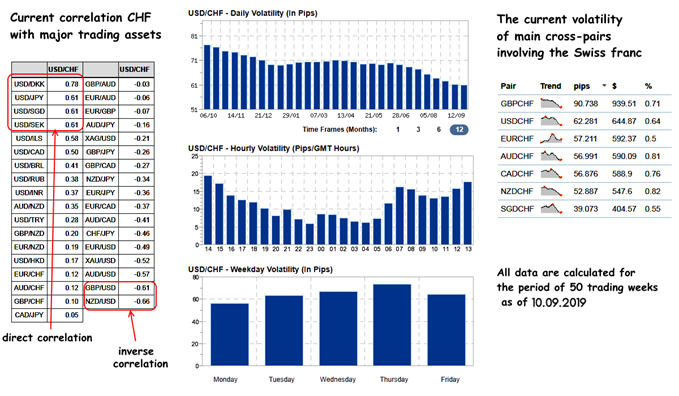 The most volatile trading sessions are Europe and Europe-America, the most active trading day is Friday (towards the end of the week, traders «remember» about the franc and are actively hedging).

Speculation was reinforced by the fact that a few days before this happened, «figures» from the SNB authoritatively stated that the policy towards the euro would not change.

However, stock market analysts noticed early on that the event was approaching. In the fall of 2014, the volatility of EUR/CHF fell sharply, as if some of the major participants (most likely the SNB and its associated players) were actively selling EUR and buying CHF in any amount. The further fate of the franc is sad for everyone: its rate has risen at the moment by more than 30% in fixed assets.

The cruel Swiss crash test caused a local collapse of all financial markets. The Swiss stock market has lost about 25%, most companies have lost an average of up to 15% of the value only in the concluded contracts, and it’s impossible to estimate potential losses at all. Franc in the base pairs was being corrected for three more days in a «search» for a fair price.

At the moment, the behavior of the Swiss currency has stabilized; the base rate of USD/CHF is still moving in the range, only at new levels, but now the probability of the boundaries breakdown is much higher.

A few words about the main assets.

USD/CHF evaluates the relationship of European financial and banking structures with global businesses, in particular − the US. The «nervous» reaction is caused by European and American statistics, the demand for gold, European and Asian securities.

Speculations are possible on the statements of officials, and the monetary policy of ECB and Fed have a strong influence on the results of European and American papers, the movement of stock indexes FTSE 100, the Swiss Market Index, DAX, CAC 40.

The dollar puts pressure on the franc only in case of strong events − as a result of the impact on the euro. An independent trend is formed only on global problems when «big» money needs to be hidden from risk. With a slight delay, this pair can be used to forecast the dynamics of EUR/USD and all major cross pairs involving the franc.

The cross pair that has weak liquidity, the strong influence of the yen, for speculation is used very rarely. The main volume is provided by the exchange operations of the ECB and the SNB, commercial and short-term option contracts.

The most volatile cross-pair, but poorly predicted and usually has a very high spread. Previously, it was actively used for carry trade transactions, but now they are used only by Asian players to correct current contracts.

It actively responds to the growth in demand for the yen, the statistics of Switzerland, the Eurozone and Japan, stock indices in Asia and Europe.

It fully monitors the EUR/CHF movement, works well on sharp reversals on the news: with a positive for the GBP, cautious purchases are made, and with a negative - the pound is quickly «dumped» and divert capital to a safer CHF. High liquidity is guaranteed only during the European session. The daily volatility of an asset can reach several hundred points.

Australia and Switzerland are working on different trade interests: the USA + Asian region and the EU countries. Low-liquid pair is used in the carry trade, rarely - for speculative purposes.

Asset volatility can be considered an indicator of the rate of change in quotations of these currencies, and any crisis causes the appearance of price spikes.

Cross-rate of the «commodity» Canadians and the «golden» franc. Strong correlation with WTI oil and non-ferrous metals, as well as with the dollar index, EUR/USD and USD/JPY. Volatility is strong (due to oil), but poorly predicted. Spreads are high, to speculate with this pair is usually unprofitable.

Traditionally, various options of the «grid» trading strategy on pending orders are relevant, which is beneficial as long as the price moves in a fixed channel. On average, such trading systems provide an average of about 130% per year, with a Sharpe ratio of 1.7-2.3.

Techniques associated with the Asian flat or daily «boxes» are unprofitable, but all trend patterns can be traded almost around the clock. Intraday, you need to trade with small targets; otherwise, you can easily get on a long flat: sometimes it will be more profitable to close the deal than to wait for activity (see Using Graphic Tools).

The carry trade operations are usually made against EUR, GBP and JPY. Therefore, we monitor the economic situation in these regions.

We do not trade on swaps - generally, they are very small and do not cover the costs of long transactions. Candlestick patterns on assets with the franc are often worked out unstable. Significant news related directly to the franc is rare and, as a rule, difficult to track.

Sources of information and useful links

The main volume of operations is provided by hedging operations, SNB exchange operations, and short-term option contracts. It means that the fundamental background for the Swiss Franc is quite complex, but technical analysis on such assets works fine.

Crash Flash like 01/15/15 occur extremely rarely, speculative price hikes are almost absent, the correlations don't break for long enough, and therefore it is possible to earn money on the underlying assets of USD/CHF and EUR/CHF.

The base pair USD/CHF is highly liquid almost the entire trading day, and its stable dynamics is suitable for traders who are accustomed to calm trading, but successful trading with CHF cross pairs requires sufficient experience.

The testing of this currency feature was arranged in Forex Tester with the historical data that comes along with the program.

To check this (or any other) feature’s performance you can download Forex Tester for free.

In addition, you will receive 20 years of free historical data (easily downloadable straight from the software).

The confirmation email will be sent to you immediately (in some cases, it may take a couple of minutes). Please check your email!

*If you haven’t received an email, please check spam. If it’s not there, contact us via email support@forextester.com or website chat.