In the process of formation, Brilliant looks like a common but rather volatile flat. Diamond should have reasonable buffer time. This is not a pattern for short-term speculations, but at least a mid-term figure.

It is a proper Rhombus (in which a growth period is roughly equal to a decline period) that is considered the most reliable option.

On the periods of H4 and higher, the pattern steadily works for a reversal. The figure is hard to identify at all on low timeframes, but if it appears after all, the trend is most likely to continue. The signal is considered working only within the confirmation by trading volumes. So let’s begin.

Technical parameters of the pattern

Constructively, the Brilliant pattern is a closed graphical figure of a converging and diverging triangles with shared peaks, borders of which are considered the lines of support/resistance of different directions. Small fluctuations at the borders zone don’t disrupt the common figure.

Theoretically, the diverging part must contain no less than three waves for all options, while compression in the second part can happen with two waves.

A correct correlation of waves is rare in the real market but the common principle — compression faster than diversion — must be fulfilled. The model necessarily has the consolidation zone (about in the middle) with the waves of rollbacks directed toward it.

The exit of the price from the Rhombus model is worked out by standard rules of triangle: with a breakout of the lower border, we sell; the higher border, we buy.

It’s interesting that on the bullish trend, the time for the model to be formed is usually less than for an analogical figure on the bottom of the market. Usual market logic works — players always sell assets way more willingly than buy.

The more waves are in the pattern zone, the stronger movement there will be on the border breakout. Let’s look at it in detail. 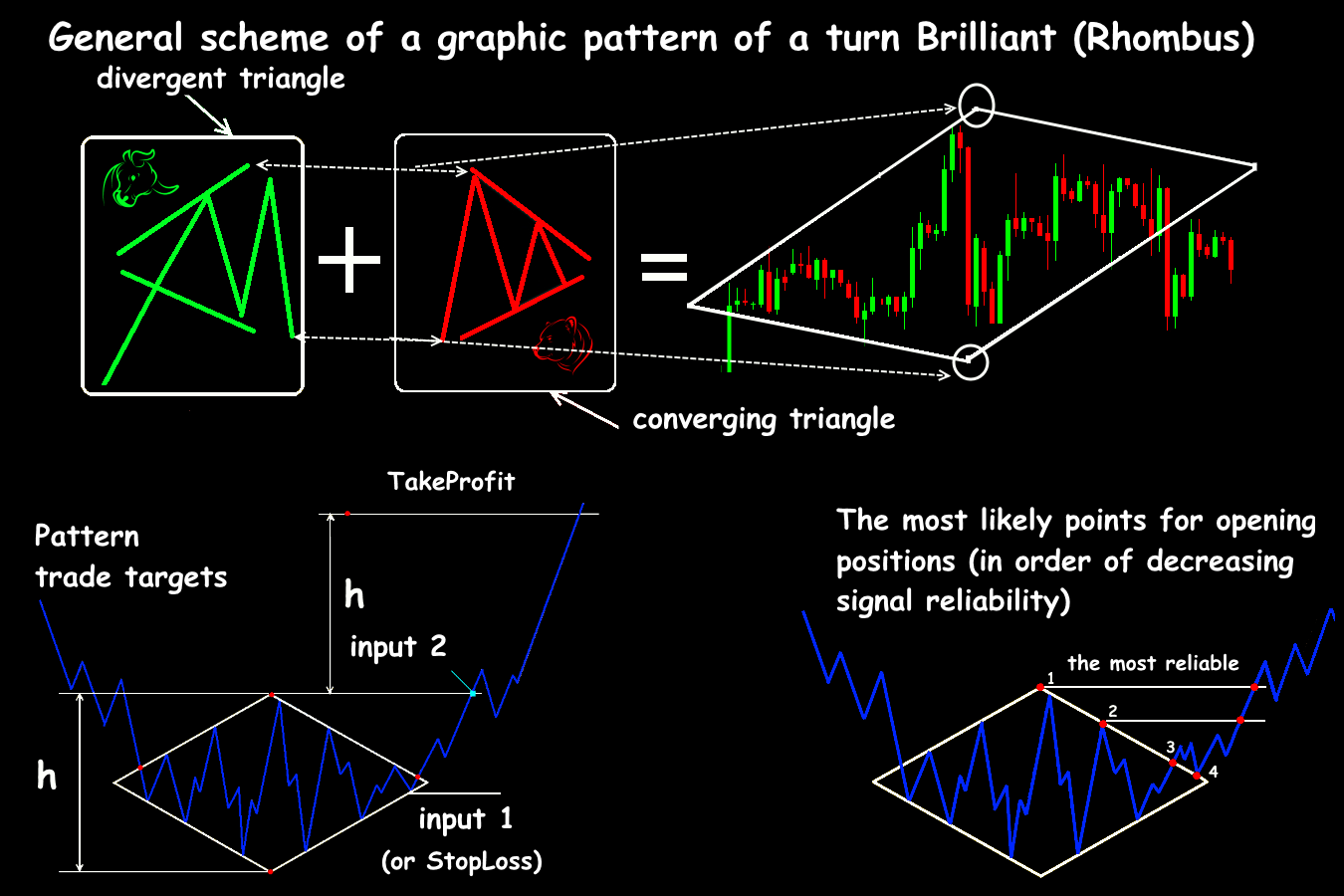 Standard version of the Rhombus pattern

Theoretically, after the trend reversal, the price must go the distance equal to the height of the model (max-min) postponed from the breakout point.

Diamond: model of a turn of the ascending trend

We strongly recommend to move the order into a breakeven as earlier as possible and necessarily fix the profit partially.

The movement above the maximum goal point happens extremely rarely. The minimum period for analysis and search of the entry point is H1, the period for the deal accompaniment is no lower than H4.

Dynamics of volumes in the Brilliant pattern

We remind: defining the direction of the main volume vector was always an average trader’s problem. What it means is that you should follow the general mass of market contracts to trade at least at breakeven.

Diamond: model of a turn of the descending trend

Brilliant is a long-term, constructively difficult unstable model, and the analysis of the trading volumes dynamics is necessary to identify it.

It is optimal to use real exchange volumes, but tick volumes can be analyzed as well (see Using Indicators). Regardless of the reversal direction, the volume acts in the same way:

Any deviations from the classical shape and dynamic of volumes, if not cancel the Rhombus pattern, then at least decrease the effectiveness of its trading signals.

The size of Brilliant can be large enough, but the trading inside of a ready model is considered risky and not recommended for beginners.

Of course, if Brilliant was formed, for example, on the D1 timeframe or higher, then you may trade on small timeframes using ordinary methods, but controlling the global model.

All Rhombus models are considered unstable constructions and break on speculative volatility. On H4, Brilliant gives a strong signal, but rarely reaches estimated goals within being processed, and its reversal signal is too weak on the minor periods.

E.g., the Head-and-Shoulders pattern looks much alike Brilliant, giving a reversal signal as well, but way later, which leads to a too early entry into the deal.

What is the result? Due to the support of precisely directed volumes, Brilliant appears much more often with futures and stocks, than in Forex.

In real market conditions, models have non-standard shapes with shifted borders. Fulfilling all the conditions must be strict because a trader constantly has a desire to “continue drawing” the model visually — with no real confirmation.

We remind: open a position only on a fully formed model. Correct in-time identification of the Brilliant model allows to earn well enough in the medium term.