To some extent, participants of all markets track employment rates, but while the reaction to publishing is delayed or may be poorly expressed at all on the stock or commodity market, the currency market usually gives quick speculative reaction, suitable enough for short-term earning.

The risk for loss in such deals usually gets dozen times bigger, but if acting sensibly, then it is possible to earn on one successful NFP more than for two weeks of careful mid-term trading. So let’s begin.

Impact of the labor market statistics on the economy

Even though all the employment rates are delaying upon the calculating structure, they perfectly diagnose the state of the economy.

Growth of employment stimulates the enhancement of the national currency, activation of consumer and corporate lending, growth in sales volume not only for fast-moving consumer goods but for accumulation goods as well.

While the employment rates grow, it is recommended to trade for the national currency increase, invest in the national stocks at least for the mid-term perspective.

Decrease of the employment level leads to the decline in GDP, an increase of the pressure on the budget (allowance, pension, subsidy), a decrease in the consumer costs, and the retail sales volume. This is an apparent sign of structural problems in the economy, recession, dependence on the import, crisis in the raw materials market.

While the employment rates fall, we trade for a decrease of the national currency, sell stock assets and raw materials that are prevailing in the country.

At the end of the article, we will provide you with the summary table of employment rates with the necessary information, but let’s look at the most important of them in detail.

Shows the share of the unemployed (not officially employed) population: the ratio of the number of unemployed people to the overall workforce number.

Includes only the people who are interested in searching for a job, excluding ones who study, principally not working, etc.

The higher is unemployment, the worse are expectations in the economy. A decrease in the number of unemployed people positively affects all kinds of markets and gives support to the national currency. It is relevant for all countries.

When taking trading decisions, it is necessary to clearly understand what has caused a decrease of this rate: the currency devaluation, speculative growth of import, political or natural cataclysms.

As a whole, the trader’s actions due to the mentioned unemployment information must be synchronized with reactions to the data of the Consumer Confidence Index.

Relation of the number of employed people not to the overall country population, but only to that part of it which is considered economically active — from 15 to 72 years old.

Employment level and unemployment level are straight antipodes which, in pair, demonstrate the state of the nation. What this means is with the growth of employment, it is recommended to trade for increasing of the currency; with negative numbers, we need to use a bearish short-term strategy on all the national assets.

It is exactly the American labor market that makes the strongest impact on the base assets. For the recent 20 years, the employment statistics of FRS are considered the key indicator of the national economy’s “health”, and at the same time, are most often used for market manipulations.


The employment index in the private sector of ADP

This index shows the change of the employed number for the previous month regardless of the agriculture sector and government workers.

The Automatic Data Processing, Inc (ADP) agency is the leading unit of statistical data in the USA and gives services of payment of salaries; processes over 500000 payrolls for nearly 450000 economic entities (more than 25 million of people) in all general industrial branches.

The NFP report strongly affects a large number of markets (currency, stock, the USA treasury bonds, interest rate, and raw materials market) due to the status of the dollar as the world’s reserve currency.

The report is published by the US department of labor on the first Friday of each month at 13.30 GMT as a whole block of data:

Reflects the change of the average hourly wages level for the general kinds of industry excluding agriculture.

It helps to estimate the inflation dynamics — a sharp increase in wages overtaking the productivity, points at the start of inflation growth.

The rates above expectations show a positive result for the USD (growth); the rates below expected are a signal for decreasing.


Average length of the working week

The average number of hours spent on work by workers in the non-agriculture sector. Length of the working week rates give an indirect but quite an important signal: if this time shorten, problems emerge in the economy.

This is an important factor that defines both industrial production and income of individuals in the current month.

The rate dynamics are seasonal, in the periods of holidays, technical, natural or political force majeures (e.g. shutdown in the USA) this data is considered incorrect.

The rates above expected mean a positive result (growth) for the dollar; the rates below, the bearish market for the USD.

The overall number of the employed population in the non-agriculture sector makes about 80% of workers, who produce all the GDP of the USA. This is the data about how many job opportunities have been created or lost in the USA economy over the past month.

Monthly changes and adjustments of the data may be quite strong and not always logical.

The rates above expected show speculative growth of the dollar, but most often with a rollback. It can continue at least till the closing of the European session. The rates below the forecast guarantee a sharply negative short-term market for the USD. 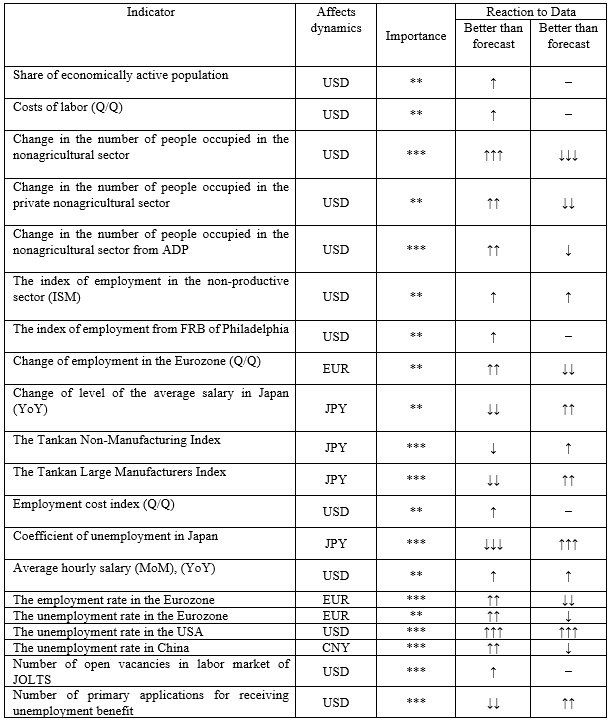 What should one trade within NFP?

If you are a beginner with a minimal deposit, then the answer is single — nothing. Before and during the publication of NFP, speculators hunt right after your deposit. Delve into the fundamental employment rates and trade on mid-term tendencies.

If you have successful experience of trading on news, and your broker doesn’t stand in the way of your short-term speculations, then the most profitable yet the most dangerous strategy will be a combination of the pending Buy Stop/Sell Stop orders 3-5 minutes before the publication.

The most reasonable tactics will be the entry at the second M5-M15 candle — for the rollback or the confident general movement — after the data is published and available for analysis. Assets: USD/JPY, EUR/USD, AUD/USD, the dollar index.

and here is an excellent economical calendar: www.investing.com. Wishing profits for everyone!

To check this (or any other) analysis performance you can download Forex Tester for free.