Flag Pattern: a rest before the battle

Understandably, there is no trend without corrections, and therefore the Flag is almost the most frequent pattern in graphic analysis. The model is considered reliable for the continuation of the trend, but the problem is that its simple outer form is very deceptive.

The ability to “see” and correctly evaluate the range of the Flag pattern development on time gives a trader an additional tool in the struggle for profit, thus, — let's get started.

The appearance of the Flag corresponds to a short-term correction of the main trend, during which the weakest players are knocked out of the market, and then the trend continues with new volumes. There are several periods of activity in the process of pattern formation:

Technical parameters of the Flag pattern

Graphically, the Flag looks like a parallelogram directed against the main trend: the Bear Flag in the downtrend looks upwards, and the Bull Flag has a downward slope.

The upper trend line appears as a resistance, the lower border — as a support, and there are no clearly defined extreme points on the Flag’s “cloth”. It is assumed that all activity occurs in the area between the borders (see Using Graphic Tools). 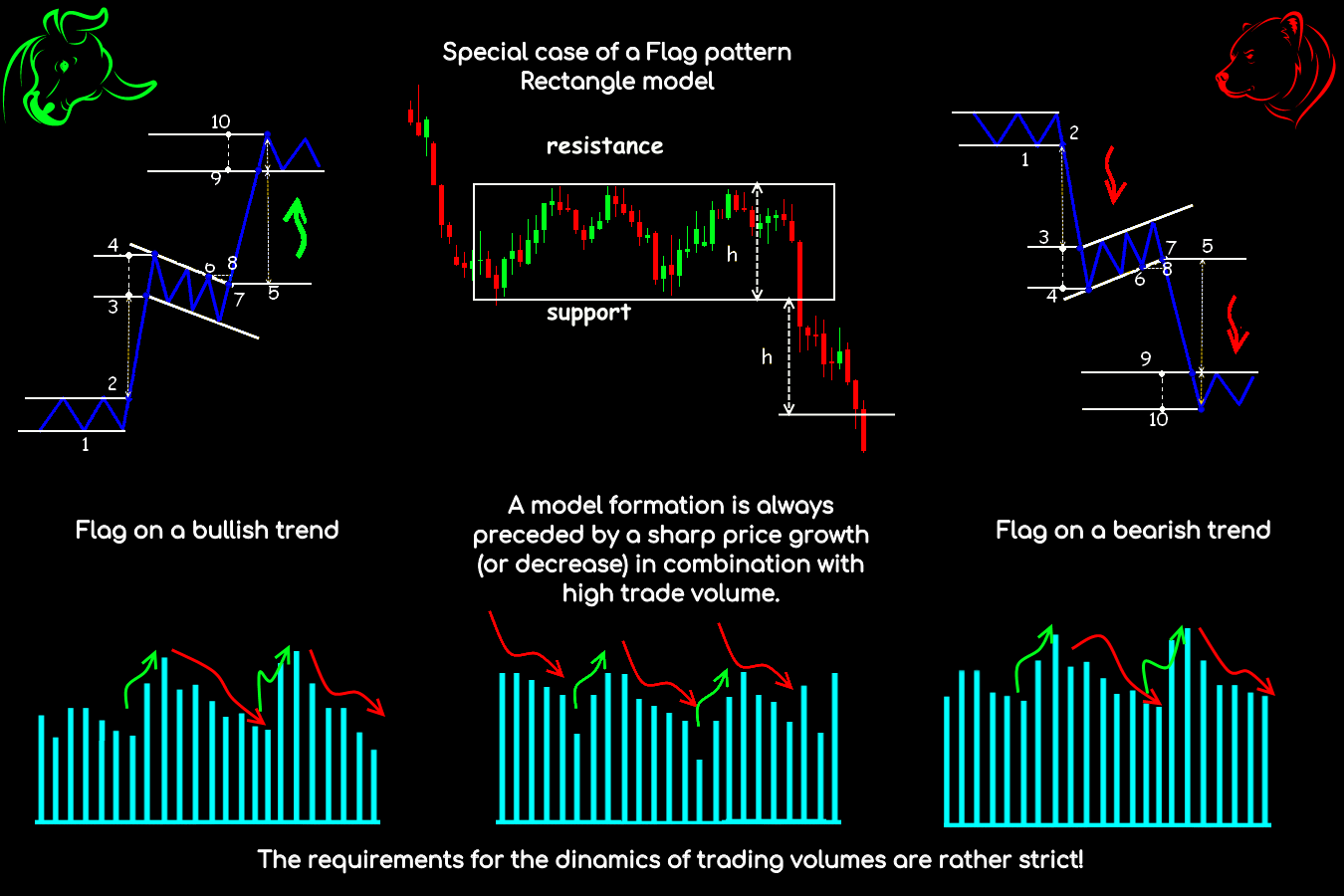 Standard version of the Flag pattern

The pattern is considered “short” – usually, 5-10 candles after the Flagstaff are enough, but the smaller the timeframe, the more bars are needed for its reliable identification.

Flagstaff sections can include price gaps and often appear in the zone of strong price levels (options, round prices, closing periods) — this is where pending orders are accumulated.

The length of the Flagstaff is used for an approximate calculation of the expected growth (fall) — from the point of the border breakdown in the direction of the trend.

Everything seems to be simple, but not always. Let's take a closer look.

According to the theory, the price should test the key border at least twice in the Flag area, after which the breakdown can be considered a trading signal.

We remind you: you need speculative throws of prices, for example, during the news publications, and the parts of Flagstaff are completely different situations. In the first case, the reverse rollback occurs almost on the next bar and at least by 50-70%, and in the second — the price rolls back gradually, in waves no more than by 20-30%.

When forming a horizontal Flag (“Rectangle”), the signal strength during breakdown will be average, and you need to work with such a pattern using the usual flat breakdown technique.

There are two methods that are used for trading solely on graphical analysis without additional indicators.

A fully formed Flag pattern is needed; it is assumed that 4-5 waves pass until the breakdown in the area of the “cloth”.

After the third (approximately!) wave, we place a pending order (Buy Stop or Sell Stop) at the level of the previous local min/max in the direction of the breakdown, or enter manually after fixing the key candle outside the figure.

We coordinate the goal choice with the general situation in the market. The maximum goal is the size of the Flagstaff; the more probable is the difference between the height of the Flagstaff and the width of the Flag’s base (see Using indicators). 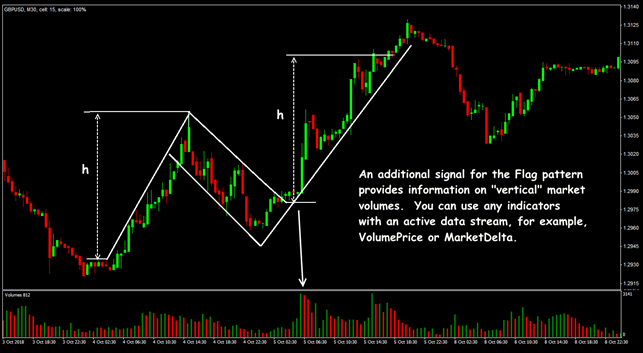 Statistics show that the Flag breakdown, as a rule, is worked out by 60-70%. It means that after 50% of the potential range we pull the Stop to breakeven and then continue pulling by trailing in increments of 10-15 points.

Drag the usual Fib grid on the length of the Flagstaff and then proceed according to the standard scheme:

The Flag is a great chance to earn on the trend continuation, and the cancellation of this model (a reversal) is extremely rare. However, like any other graphic pattern, the Flag is not immune to false signals; besides, any speculative movement can break it (and build a new one!). Therefore, the use of protective Stop Loss above/below the figure’s boundaries is mandatory!