GDP indicators: an optimal indicator of the economy’s «health»

As a rule, a breakthrough in economic theory is preceded by global crises. It is believed that Simon Kuznets, an American economist of Russian origin, was the first who become interested in evaluating the national product: his calculation and analysis of the GDP dynamics had been accomplished during the Great Depression and covered the period from 1929 to 1935.

Nowadays, GDP is a general macroeconomic pointer of “health”, and its indicators are included in the necessary minimum statistics for analyzing the economies of countries with any, even non-market, economy.

Official data are published regularly and always available for study. For example, we receive data on US GDP three weeks after the end of the quarter.

A bit of a theory


Let's recall: the gross domestic product (from now on GDP) is the total market value of all goods and services produced domestically over a reporting period of time. The real GDP is displayed in constant prices, the nominal - in current prices.

The quarterly and annual GDP is analyzed in comparison with the previous period. The publication mode can be found in the economic calendar.

The GDP indicators of several countries may be interrelated: the region, joint raw materials, active trade relations with large mutual exports. The reciprocal influence is especially noticeable if the economy of one of the partners is stronger.

A great example is a chain of China + Australia + New Zealand. Thus, a decrease in the GDP of the leading partner reduces the volume of exports. However, on the other hand, it stimulates the domestic production of those countries, to which the supply of goods, raw materials or energy is suspended.

The dynamics of GDP requires a comprehensive analysis, as it is determined not only by economic, but also by social, foreign policy and even natural factors. For example, strong domestic consumption with weak GDP dynamics means that most of the demand is satisfied by imports.

Depending on how much investors who determine the country's economic policy will be satisfied with the current rate of the national currency, the market will adjust, and traders will be able to earn.

For internal use, GDP data are measured in national currency; for analysis of financial markets, they are converted into USD.

How to use GDP indicators


The constituent elements of GDP, that are published more often than global data, show which particular sector of the economy is worth paying attention to.

Annual figures are considered a more accurate estimate, but for medium-term methods, it is better to analyze the data quarterly or month-to-month, such as, for example, industrial production and retail sales.

If we talk about the impact of GDP on the foreign exchange market, then economic growth as a whole should support the dynamics of investment returns. The foreign funding, for which the investors first need to sell their currency and buy the currency of the country in which they intend to pour the money, exerts a strong pressure.

The impact of GDP on other types of assets is much more complicated. In essence, overall economic growth does not guarantee the same for individual companies or industries, and in this case, we should pay attention to the components of the global indicator.

The dynamics of GDP is extremely important for the debt market, especially for the government securities market - it is an indicator of investor confidence in the country as a whole.

Nevertheless, the decline in GDP affects all sectors of the economy, and the stock market is the first to respond to this fact (see Using Graphic Tools).

The dynamics of GDP and its absolute value affects the status of a distinct currency in the world market, in particular, in the basket of currencies used to calculate world and industry financial indices, such as DXY or KOSPI.

GDP growth is considered a confirmation of the positive economy, and accordingly, leads to an increase in the national currency; with a decrease in GDP - the rate falls.

Nevertheless, the fact of publication of GDP indicators has a limited impact on the market, because usually all its components (industrial production, personal income/expenses, construction costs, unemployment, etc.) are already known.

Absolute GDP values are important primarily for analysts; only its dynamics are of commercial importance: the more active the economy is, the stronger is the national currency.

For example, the excess of actual growth in US GDP by 0.1 percentage points over the forecast may cause a strengthening of USD by 50-70 points.


A reaction suitable for speculation is usually provided by statistics of countries with funding currencies, that is, the publications of GDP dynamics in the USA, Japan, Great Britain, China and the Eurozone. But we want to add a few comments. 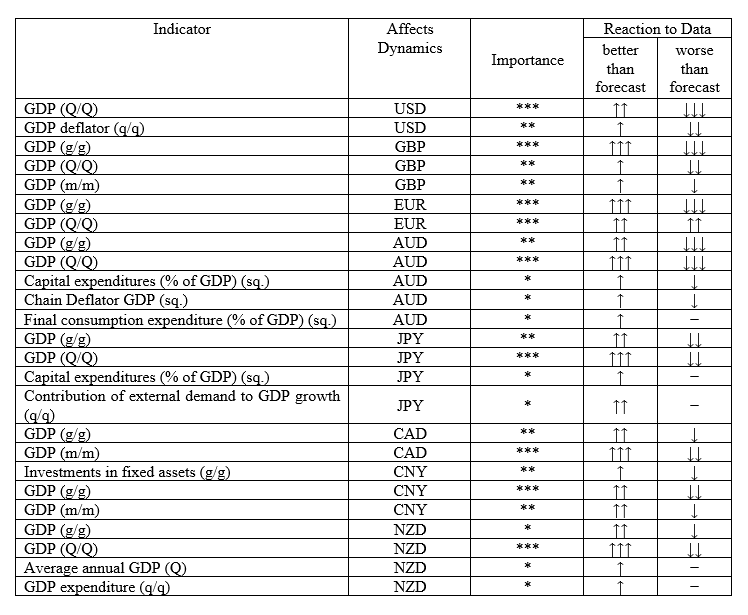 The impact of GDP statistics on the economy is distributed over time. It means that quarterly and annual indicators are used as additional control over the effectiveness of the strategy in the medium and long term: it is possible that the real market situation was assessed too optimistic, and it is worth adjusting not only trading actions, but also money management.

To check this (or any other) analysis performance you can download Forex Tester for free.