TDI indicator: hybrid, independent and effective. Take it to your team!

Hybrid indicator Traders Dynamic Index, the algorithm of which was created by the usual trader Dan Malone, performs a full-fledged market analysis: in addition to the direction and strength of the trend, it allows you to effectively assess volatility.

Despite the fact that the author's strategy of Trading Made Simple was scalping (on M5-M15), practice proves that the indicator’s signals are effective on any timeframe and trading asset.

The purpose of this indicator is quite difficult to implement: you need to successfully catch a strong volatility, remove speculative throws, but still stay in the current trend.

So, the first task of the TDI indicator is to qualitatively filter the sections of the flat, the second − to distinguish between the price movement entry points, suitable for short-term and medium-term transactions.

A comprehensive analysis of the situation highlights the entry points with a high probability of success. There are no special secrets in the calculation mechanism, this indicator is a successful software solution that combines several indicators in one circuit and simplifies visual perception.

The indicator is based on a method of the calculation of RSI − all lines of the indicator are calculated on the information of the main oscillator. It forms the overall graphic picture, because the main task is to assess the rate of the change in the price.

The next step: the range of volatility is determined by the Bollinger Bands indicator, the initial data for which is the current RSI values: this allows you to «diagnose» trend areas and flat periods. The parameters are normal, it is not recommended to change them. The middle line is highlighted in a separate color and is considered to be the base (balance) trend line.


The choice of parameters obeys the usual logic:

The indicator TDI is included to a standard set of the popular trade platforms, but its different options can be downloaded freely on internet.

Traditionally for the oscillator, the indicator is located in an additional window under a price chart with the balance sheet level of 50 and additional levels above/below (author's values − 32 and 68 are by default selected). Versions of the indicator with an audio signal at the appearance of the critical points are the most popular.

Standard version of the TDI indicator

The green line is a flattened RSI with a small period (base); red is also RSI, but with a longer period (signal): the RSI indicator itself in the traditional form is not used.

Experiments with a price type for calculation do not lead to improvement of the quality of signals. Also it is not recommended to change the parameter StdDev (default = 1.6185) − the coefficient for the root-mean-square deviation for BollingerBands.

At first glance, it is rather difficult to understand this scheme of lines.

But let’s look at it in detail:

Trade signals of the indicator

At once we warn: to use critical points of the indicator as signals for an input − is risky enough. Its lines are used only for analysis, but the trading solution must be taken with the help of additional tools (see Graphic tools)

The result of the using of the indicator is an estimate:

The short-term trend is determined by the relative arrangement of the green line with respect to the red line:

The yellow line indicates a long-term trend and most of the trading time moves in the range between the levels of 32-68 − with the exception of speculative moments. This line will define key turns for change of a trend.

If the yellow line moves below the level of 32, then the market has reached a local minimum, so a breakdown from bottom to top with a high probability means a turn toward the «bulls».

The main line above level 68 − on the market a local top is formed, breakdown of the level from top to bottom suggests preparing for a turn towards «bears».


Trend force and the range of volatility

We perform the analysis of the relative location of the blue channel BollingerBands and RSI lines:

We remind you that the narrow BollingerBands channel and weak dynamics of RSI lines are always formed before strong speculation (news, opening/closing of trading sessions, etc.). In such periods, TDI signals cannot be trusted.

The key element is considered to be the behavior of the green line: 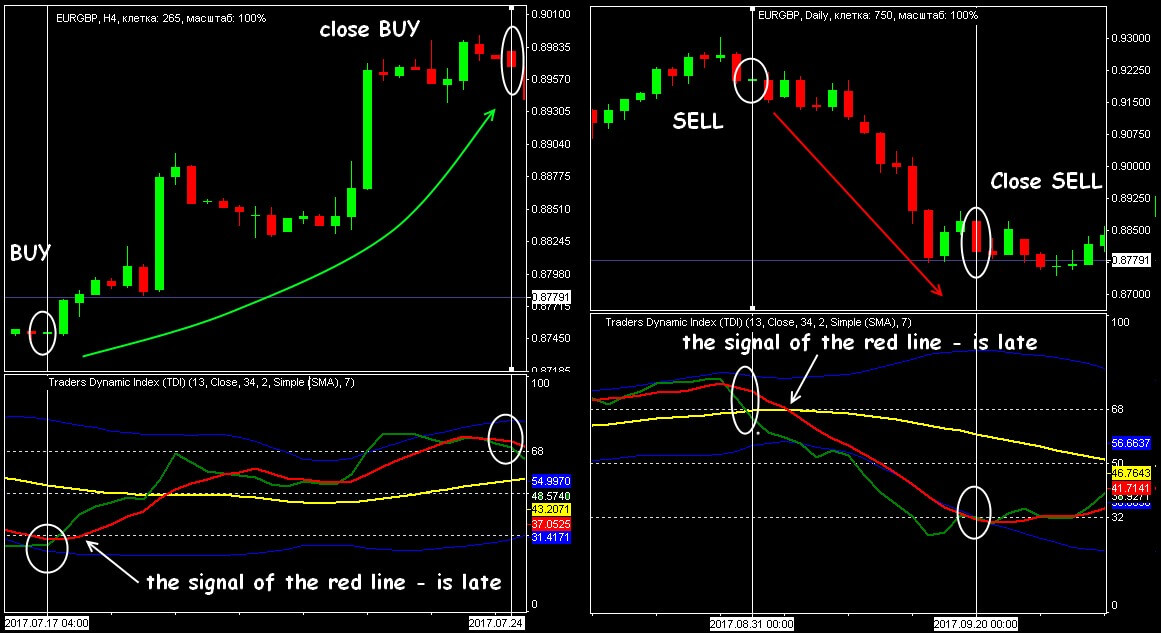 Signals for the breakdown of the key areas of TDI

Similarly, the situation of the crossing critical levels with a red or yellow indicator line can be interpreted, but such signals are very late and require mandatory confirmation.

Unfortunately, the author of the famous Trading Made Simple is no longer with us, but the ideas of his trading system continue to develop (here almost 4000 pages of the forum on this topic!).


The indicator TDI is a good example of an «all-in-one» trading strategy; what this means is:

it’s signals may well replace the signals of a full trading system. The green line is the first to react to the turn and speculation, therefore its behavior is considered to be the key for the formation of the signal. The tactics of trading depend on the duration of the transactions (see here).

Scheme of signals of the TDI indicator

A more conservative strategy (example here) suggests that in order to conclude a deal it is necessary that both lines (and the intersection point, of course) be above the yellow line − for purchase, or lower − for sale.

We open medium-term transactions after the analysis of the mutual arrangement of the red and yellow lines:

The fulfillment of the condition for the point of intersection (above/below level 50) is mandatory. In any case, to enter the Traders Dynamic Index signals the market should be quite active: BollingerBands lines must diverge, and the stronger, the more reliable the trading signal. Regardless of the availability of «suitable» intersection points, we miss periods of an explicit flat (see here).

Despite the external complexity of the lines, the indicator signals assume a classical interpretation and do not cause problems even for novice traders.

The TDI indicator is recommended to use on assets with stable volatility − major currency pairs and base crosses. Working period: is not less than H1-H4, confidence in signals on timeframes less than H1 is low.

The Traders Dynamic Index indicator is quite effective as an independent tool for trend analysis, and is also used in conjunction with other indicators (see Using Indicators) and filters to create more reliable trading systems.

Share your personal experience of the effective use of the indicator Traders Dynamic Index. Was this article useful for you? It is important for us to know your opinion.