Why to choose EUR USD while trading Forex?

The EUR USD currency pair tends to be one of the most popular pairs on Forex market. Due to official statistics the USD currency takes the first place and the EUR is at the second place when it comes to the volatility of the currency. That is why it is pretty simple to understand why the mixture of two the most popular currencies creates the most important pair.

The United States Dollar has the biggest impact over the entire world’s economics. It is heavily used to implement the transactions that take place among all the countries of the world. The central banks of most of the countries have their currency reserves in American dollars; some small countries completely refuse to have their own national currencies and take the US Dollar as the official currency. 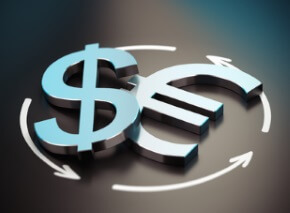 EUR USD is the most popular pair ever.

The Euro is a special currency pair. The rates of this trading instrument have considered the decisions of the governments of 16 countries. And sure enough it is much harder to come to a consensus when there are so many people in charge and pretty often they are not integral regarding most of the topics. On this occasion the Euro weakens every time the controversy takes place. The traders should pay attention to this feature of Euro and track the news factor especially accurately and coherently.

If one asks a group of traders about which currency pair they prefer to trade, then a significant part of the polled will respond positively that the EUR USD exchange rate is the most important trading instrument for them. The brokers clearly understand that people love this volatile pair and that is why offer the lowest values for bid and ask spreads. This makes the EUR USD pair especially attractive for trading as well as the spreading possibilities of tracking the most comprehensive information.


The main objectives to pay attention to while trading the EUR USD pair on Forex.

Forex Traders often declare that the fundamental analysis is not necessary at all. There are a lot of arguments related to that and the aim of this article is not in giving the ultimate fact whether this statement is true or not. If you are trading a scalping or a short-term strategy the fundamental analysis might be not that important. But for middle-term and especially long-term traders (investors) the understanding of why the EUR USD currency pair strengthens or weakens should be very significant knowledge.

Probably the most important issue that determines the price changing is the interest rates. If this variable becomes higher in the United States then the USD strengthens, if the European Union’s interest rate increases then the same strengthening will be implemented in the rise of the EUR currency pair.

One more thing that is pretty obvious but nevertheless should be taken into consideration is Non-Farm Payroll news. This news gets released on a monthly basis and has a great impact over the market in a short- and long-term as well. That is why the trades should be closed just before the release of the news.