GBP: how much is the pound of the royal currency?

Historically, it was the English currency that became the basis of the financial market. During the heyday of the British Empire, the pound played a role similar to the current US dollar.

The loss of the political influence of the pound occurred in the 40s of the XX century when the colonies actively withdrew from the control of the British Crown, and the country’s economy was weakened by the Second World War.

Before the invention of the radio, the only communication between the continents was the physical connection by telegraph cable, which was first laid in 1867 across the Atlantic (on the ocean floor). Naturally, stock quotes from Europe to America also came through this communication channel; in memory of this, the British pound is still called the “cable” in the market slang.


Today, trading the British pound requires the trader to have a solid knowledge of technical analysis and a quick reaction to fundamental events.

So, let’s get started.

The UK remains one of the world’s leading economies and has a long history of world leadership. Despite the political crisis caused by the withdrawal from the EU, national banks widely use the British pound to form gold and foreign exchange reserves. Its share in bank assets currently stands at about 5% and is continuously growing.

London remains the second-largest financial center in the world, where some world prices are still set. For example, since 1919, contracts for the supply of physical gold were carried out at the prices of the London Interbank Auction (Gold Fixing), which was replaced by LBMA Gold Price electronic auctions only on March 20, 2015. The European monetary and credit markets are now guided by the Libor rate, which is also set in London.

The British stock market remains an adequate alternative to the US stock market for raising equity capital because it has more liberal legislation and fewer costs for placing securities on the stock exchange.

GBP confidently holds the third place in financial turnover after USD and EUR: in the Forex market, operations with the base pair GBP/USD make up to 17% of the total volume.

GBP holds a special place in the history of hedge funds and currency speculation. In 1990, the UK joined the European regulatory mechanism, which was supposed to reduce external volatility and prepare the “path” for a single European currency. However, for Britain the system turned out to be unprofitable: to curb the recession, the BOE had to inject huge funds into the country’s economy.

Attempts to save the declared rate were unsuccessful, which allowed speculators of different levels to earn on the collapse of the royal currency (we recommend reading the story of the famous billionaire George Soros to the curious). Having recovered from the collapse, the British pound retained its monetary independence in the EU.

Despite the great speculative volatility, all assets with GBP are considered difficult to predict and are not recommended for beginners in most training courses.

Nevertheless, our goal is professional trading, and the pound should become a reliable partner for us.

Let’s take a closer look at it.

The independence of the UK financial policy from the European Union makes the pound a stable and secure asset. However, the idea of leaving the EU has politically weakened the currency long ago. Consider the main internal factors affecting the rate of the British pound.

A robust fundamental factor for GBP is BOE action. The monetary policy of the British central bank is quite transparent and aimed at keeping inflation at about 2%. BOE verbal interventions most often cause a weak reaction, since both politicians and members of the Monetary Policy Committee prepare the market in advance.

The BOE interest rate data are published monthly by the Monetary Policy Committee. If the rate does not change, the bank does not give any comments on this matter. If the bank changes the prime interest rate, the committee makes a particular statement, which is interesting for providing information on possible further actions of the Bank of England. 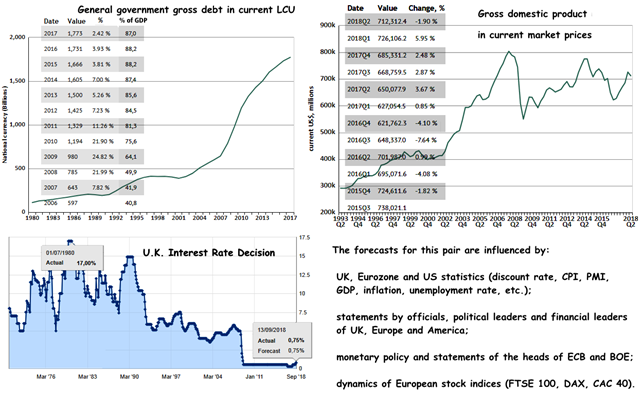 The consumer price index is published monthly by the National Statistics Service and is considered much more important - it is the Monetary Policy Committee that focuses on it when deciding to change the rate. The producer price index, as well as business activity indices (in the service, manufacturing, and construction sectors) affect the exchange rate only if there is a sharp deviation from the forecast. 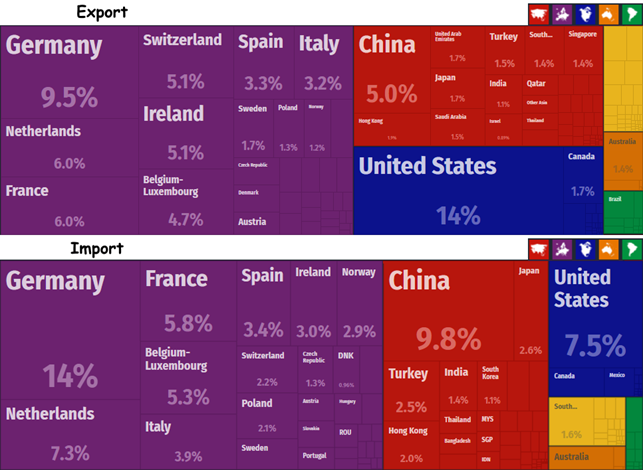 This category usually includes quarterly GDP (preliminary, revised, final), retail sales, and the index of supply managers in manufacturing and services. The impact of GDP on the exchange rate is usually lagging behind. The faster the production and services develop, and the higher domestic demand, the stronger the economy is.

For the forecast, it is better to use indicators that either correspond to the cycle or are several months-retail sales ahead of it (published monthly) and various consumer confidence survey indices, such as, for example, the consumer confidence index from Gfk or from Nationwide.

The data are published monthly. Rising unemployment means a worsening economy and the possibility of lowering rates by BOE, that is, it is considered a negative factor for the pound.

The trade balance is published monthly, the payment balance - quarterly. The balance surplus above the forecast, as a rule, leads to a growth of the GBP, if below - to a fall.

Public debt for the British economy is of particular importance since now the trend towards its growth continues. In connection with the Brexit process, the risks of investing in the country are growing, which is bad for the pound’s rate. The greater the public debt, the higher the risk, and the more (ceteris paribus) the difference in the percentage differential will be required to lure investors into the country and the currency.

After the start of the EU exit procedure, the BOE policy focuses on tightening monetary policy and raising interest rates, which was caused by a sharp increase in inflation. This means that until the final decision on Brexit, the emergence of “information throws” on this topic can break any analysis pattern.

Exit from the EU trade deal, as well as the loss of London’s clearing rights for operations with the euro, will be a strong blow to the British economy, and especially to the pound. In general, while negotiations are underway on Brexit, GBP trading remains dangerously speculative.

The idea that the pound moves along with the euro in the presence of a common foundation remains relevant. GBP is characterized by high and unstable volatility, which requires constant rigid money management. Dependence on the dynamics of the dollar and US news is currently estimated as average. The output of the British news is characterized by gaps with a sharp subsequent pullback of GBP/USD.


The base pair GBP/USD shows high liquidity for almost the entire trading day, but before the opening of the European session, trading volumes by cable are small.

However, several times a month, historical British business interests in the Asian region trigger a reaction on Asian assets during the publication of English statistics. GBP/USD activity: 06-18 (GMT) - Europe, Europe-America; 00-02 (GMT) - Asia (during the reporting period).

The trading volume is supported by BOE and ECB exchange and speculative operations, commodity and options, as well as short-term hedging operations. GBP/USD is actively used for swap trading. GBP carry trade is currently not widespread due to the low-interest rate.

Recommended trading strategies: medium-term and short-term trend, intraday scalping. Techniques for the breakdown of power levels are dangerous due to many “false” signals (see Using Indicators).

Cross pairs with GBP have a high correlation between adjacent (unidirectional) currencies such as AUD, NZD and JPY, EUR and CHF. Such pairs are useful for trading in the price channel and in breakout strategies. It is necessary to conduct a thorough fundamental analysis of both assets included in the cross-rate (see Using Graphic Tools). 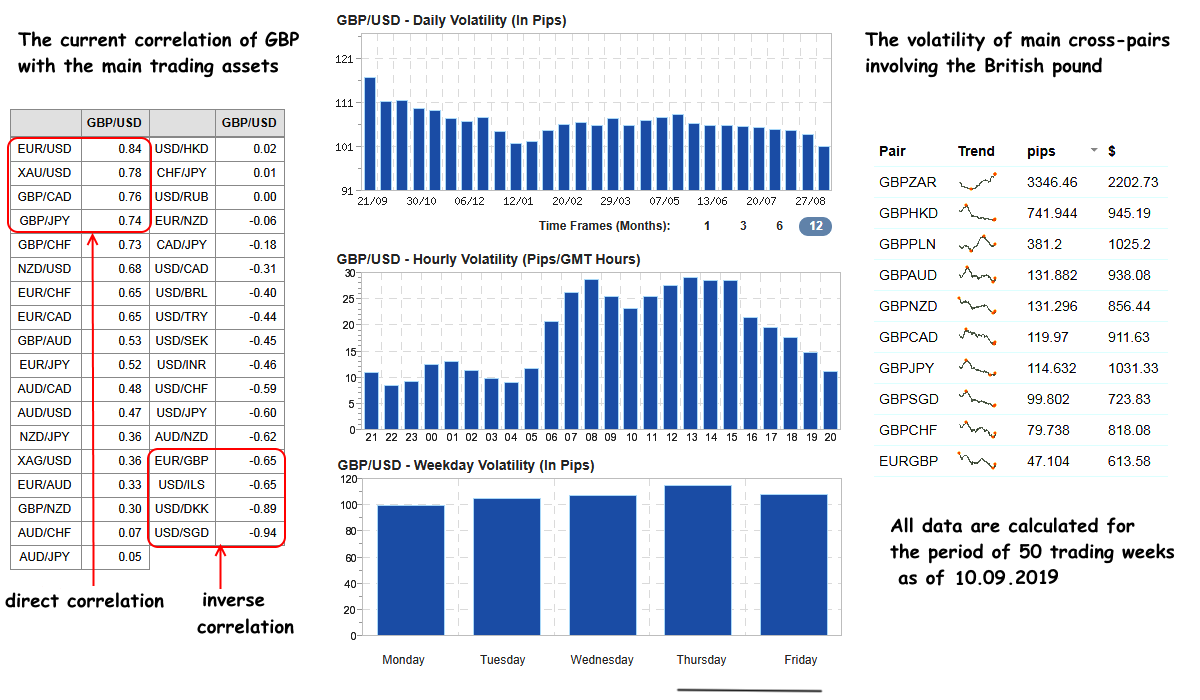 Correlation of EUR and GBP paired with dollar

Sources of information and useful links

Public information from the UK; Monarchy;

For any trader, the main problem with assets involving GBP remains as of their strong dependence on fundamental factors. What’s the result? Given the complexity of the UK market situation before and after Brexit, as well as the increasing dependence on the euro, technical analysis of the GBP market as a source of trading signals is becoming unreliable.

All political events cause a strong but short-term reaction for the pound, after which the price returns to pricing models based on the state of the British economy. So, without a thorough, and most importantly, relevant, fundamental analysis, the British pound trading is contraindicated.

The testing of this feature was arranged in Forex Tester with the historical data that comes along with the program.

To check this (or any other) feature’s performance you can download Forex Tester for free.

In addition, you will receive 21 years of free historical data (easily downloadable straight from the software).

18 symbols (including gold and silver) are already in the software.
Over 5 terabytes of data for more than 800 symbols are available in a paid subscription

Predict huge market moves: avoid them or take advantage of them.