It is believed that all trend indicators delay. The idea to build a strategy solely on impulse indicators came from the stock market, where a quick, apposite entry guarantees 50% success. We offer an option on standard Stochastics with different settings.

Description of the «Two Stochastics» strategy

We do not work with the price chart at all; we work only with indicators, and there is no trend in the system. We offer a standard combination of a “slow” oscillator (for trend monitoring) and a “faster” one for finding an entry point.

The slower Stochastic Oscillator should filter signals of the fast one and increase the percentage of profitable trades. The market entrance is supposed to be at the reversal of the short Stochastic in critical areas, and confirmation to close the deal should be sought on the long one.

The risk-prone traders can immediately open an order right after the first signal receiving on fast Stochastic. Still, a more reliable trade is opened after appearing of a similar signal on a slow oscillator. So, at the intersection of %K and %D of fast Stochastic:

The deal is fixed by Take Profit/Stop Loss or on the return signal (see Using Graphic Tools).

The script for testing the strategy was created in Easy Forex Builder; the tests were conducted in the Forex Tester. Given the unstable fundamental background, we conduct the tests on a price history no older than two years.

For the test, we select six currency pairs: AUD/USD and EUR/USD (assets with stable volatility), GBP/USD and USD/JPY (more speculative) and the most liquid cross-pairs EUR/GBP and EUR/JPY.


Settings: the FXCM broker quotes; the spread is 2 points (for all assets); the swap is considered separately (see below); the timeframe is M30 and H1. The initial deposit is $ 100 000; the leverage is 1: 100; the minimum transaction is 1 lot. The “Bars to skip” parameter is selected 20 for all tests.

All transactions are opened and fixed automatically. Trailing is mandatory to control the profit: TrailingStopPips is 40 points, TrailingStopStep is 20 points. In addition, all deals are closed when a reverse signal appears in the system. 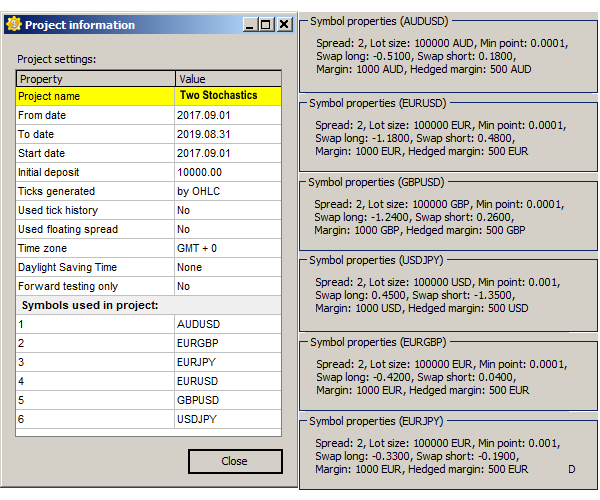 We check sequentially on each asset; only the test results are used for analysis. The maximum load on the deposit is not more than 3 lots.

So let’s get started.

First of all, let’s check the effectiveness of the methodology on less volatile currency pairs. 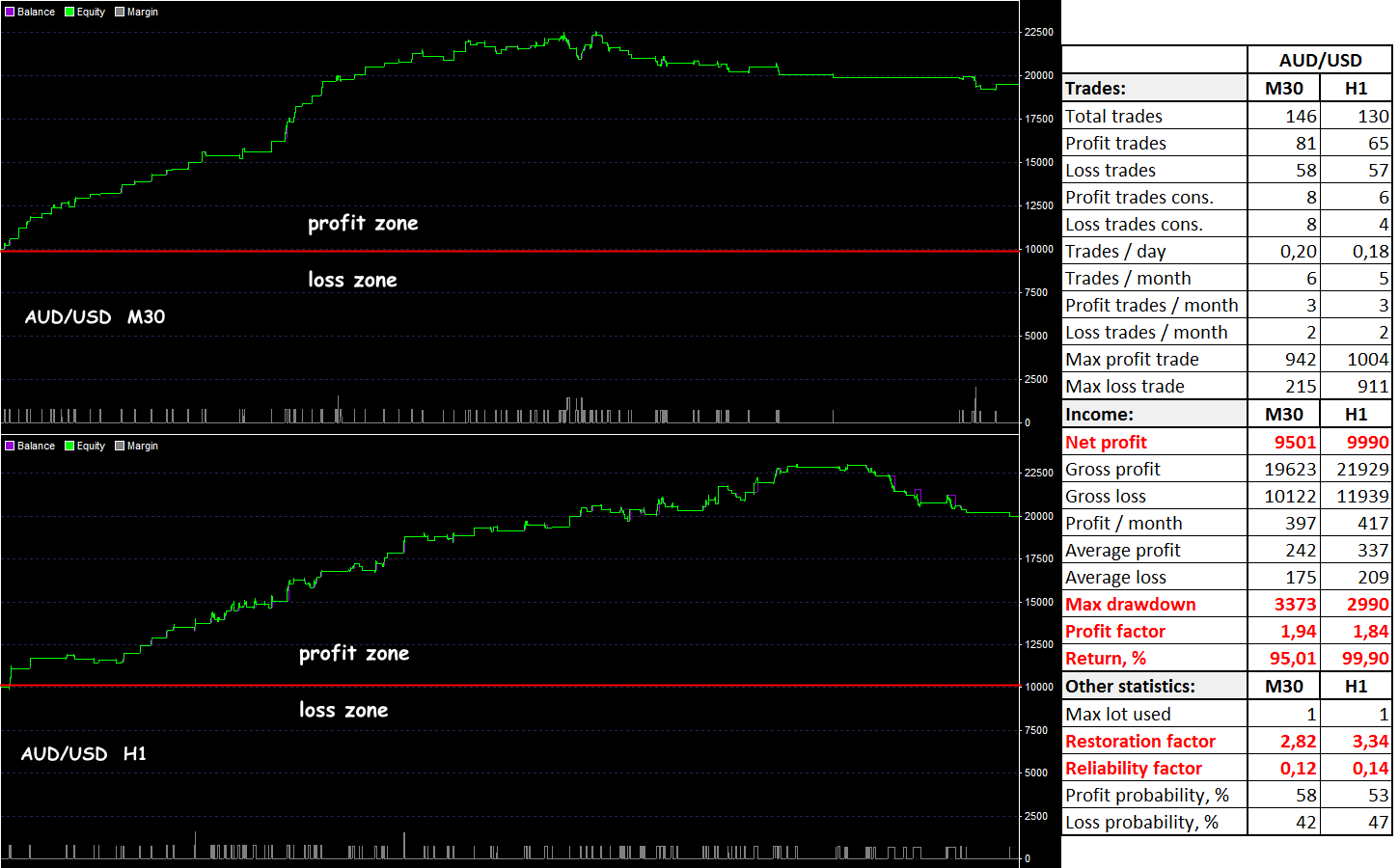 Risk analysis: the risk is minimal, 1 lot is constantly in operation; several simultaneous transactions for 2 lots do not affect the overall picture.

The first test is conducted - and almost 100% profit in 2 years. The drawdown is minimal, remains in the profit zone. The equity line is almost perfect. Perhaps for the test, the most favorable period for this pair was chosen accidentally, but the safety margin of the strategy is very high.

Formally, 5-6 transactions per month are not enough for almost scalping trading; on average, an open transaction lasts no more than three days. But each profitable signal is worked out to the maximum. 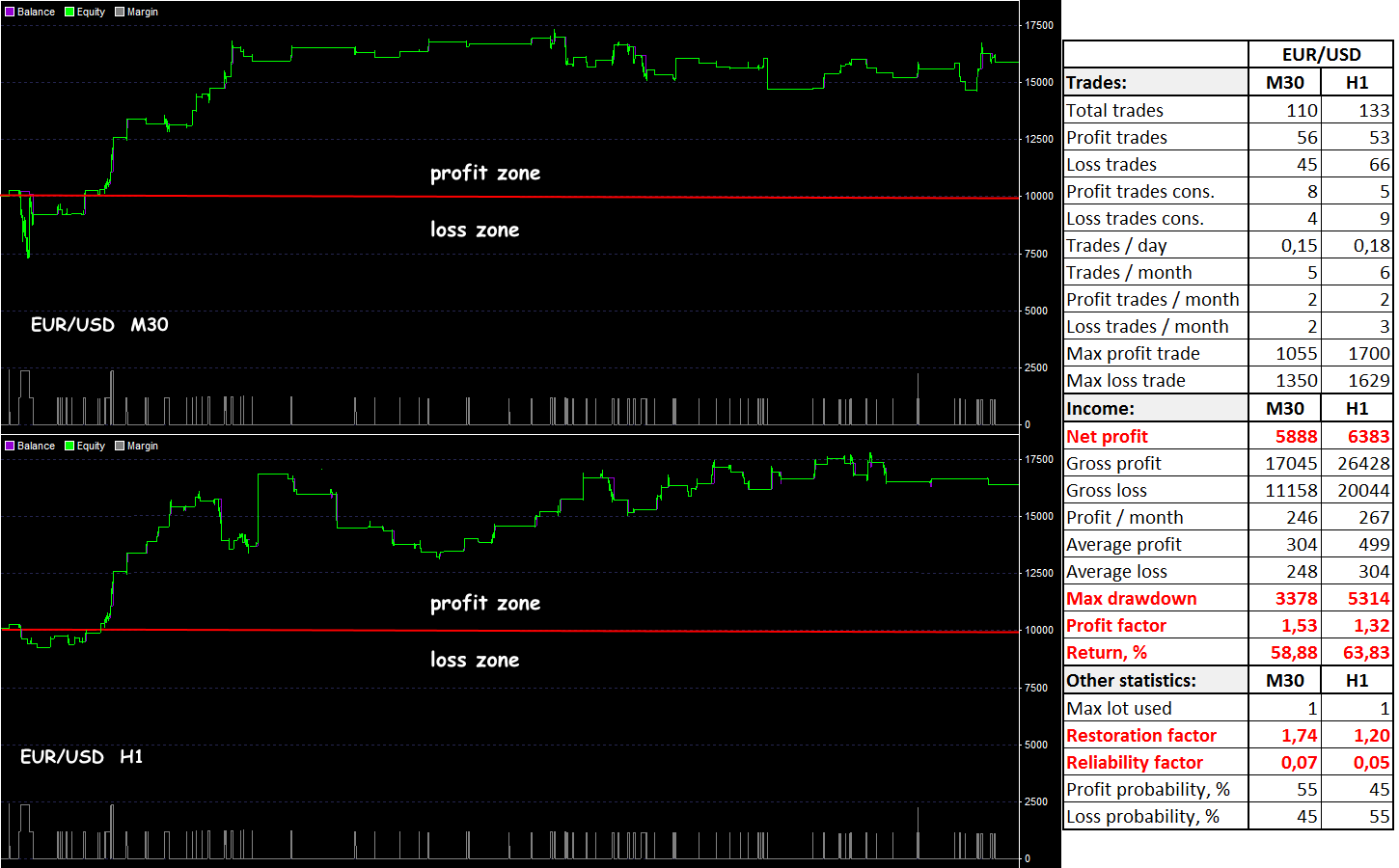 Risk analysis: the risk is minimal (1 lot); at the same time, several transactions are opened only on the drawdown at the beginning of the test.

The equity line is less stable, but the maximum drawdown is still in the profit zone. The statistics are generally strong, although during the transition from M30 to H1 all indicators worsen, especially the profit factor. Nevertheless, 30% of profit per year for a “politicized” euro is an excellent result. 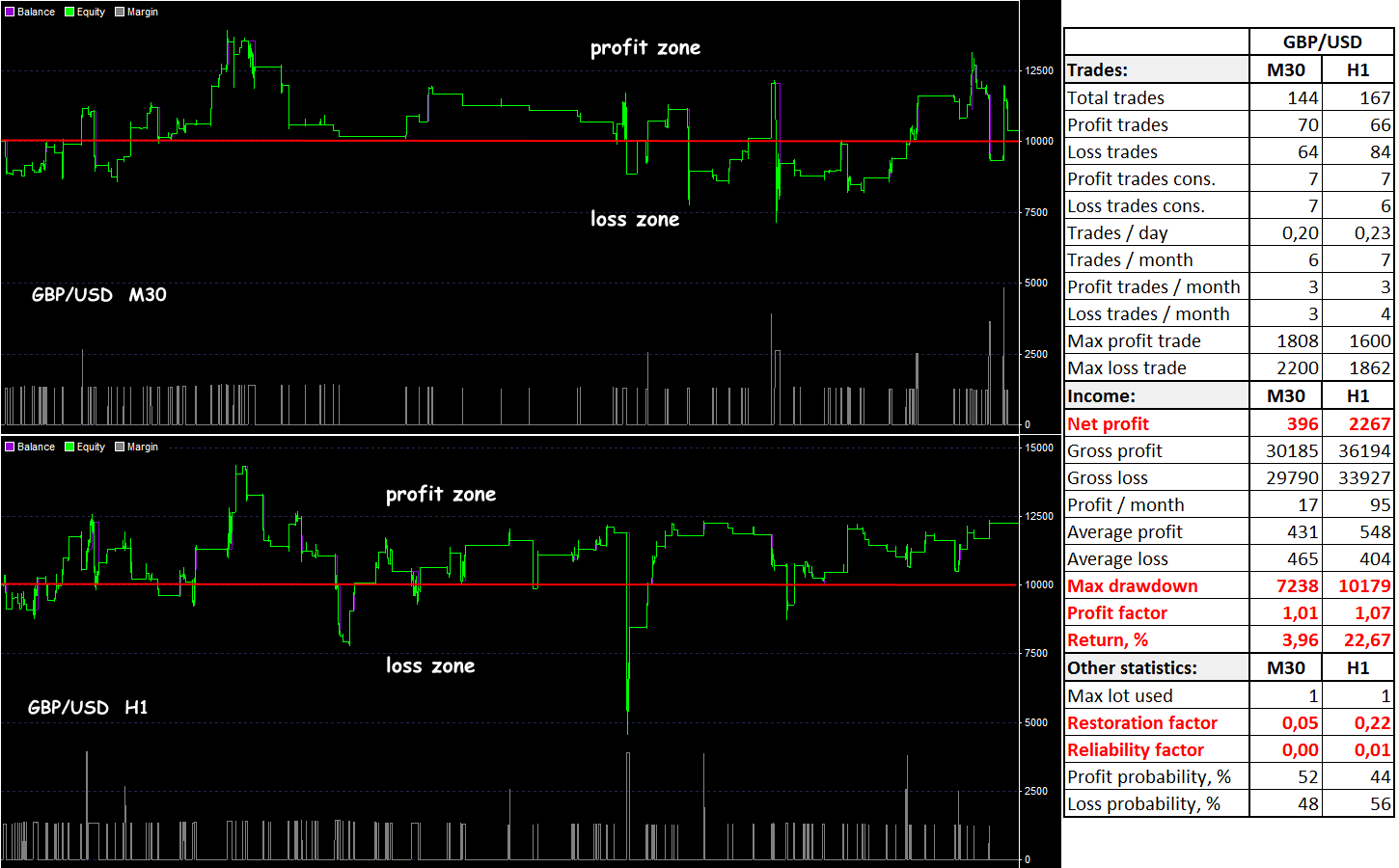 Risk analysis: the risk is minimal, but with the elimination of drawdown, the load at the moment reaches 4-5 lots, which is associated with the characteristics of the trading asset.

The test for both timeframes can be considered unsuccessful, even though the final balance was kept in profit. There is no stable dynamics; the maximum drawdown in the loss zone reaches 50%, the profit factor and recovery parameters are weak. A strategy is strongly discouraged for this asset. 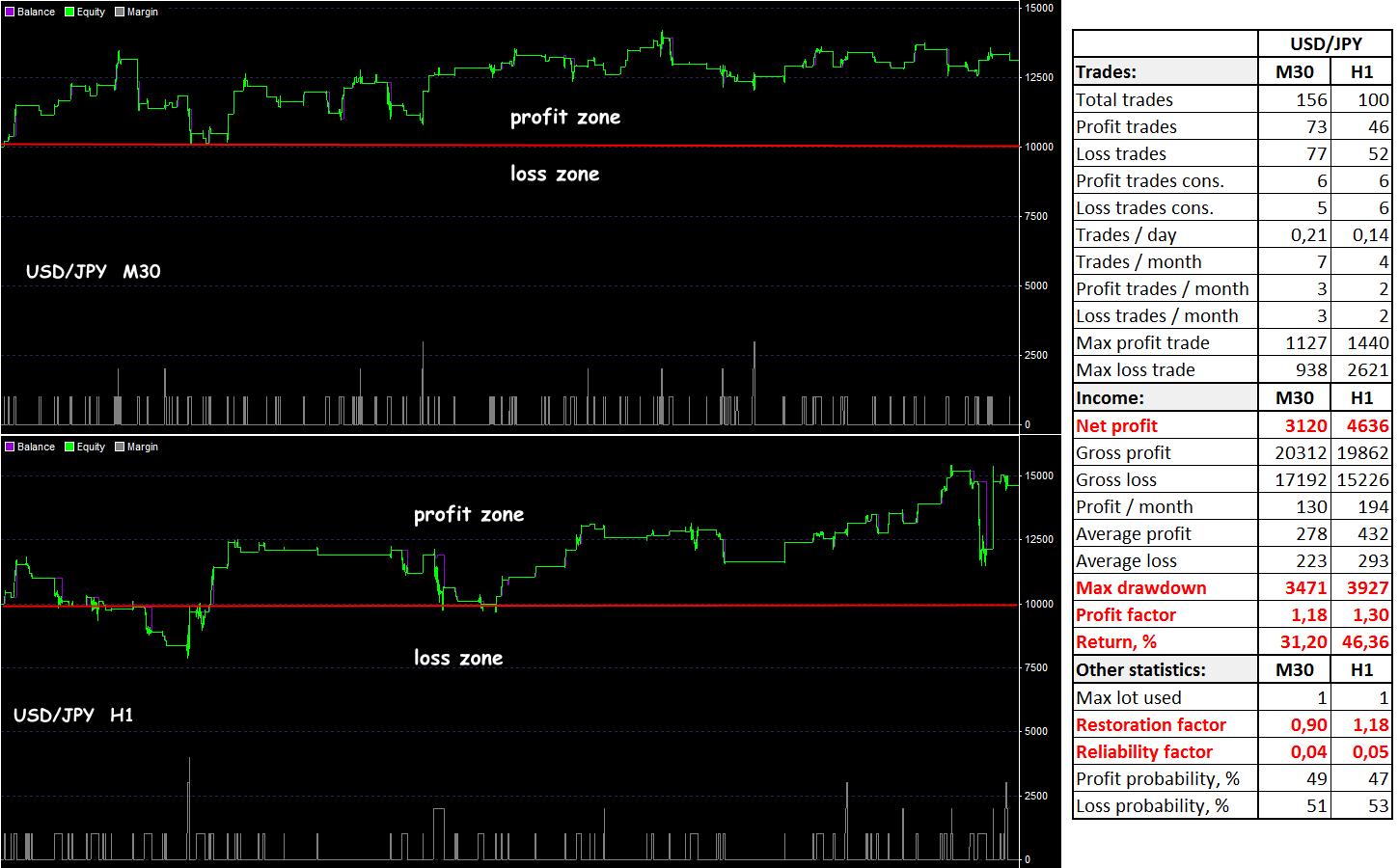 Risk analysis: the risk is minimal, several peak loads of 2-2.5 lots are not a threat.

For USD/JPY, 15-20% profit per year is a typical result with such a small number of transactions. There is no speculative profit, that is, the strategy “missed” almost all the dangerous moments. Nearly the entire test account is in profit; the statistics are stable, and on H1 are excellent.

The last two tests are performed on the most liquid cross-pairs.

Risk analysis: the risk is minimal, only 1 lot is in operation. The load at the moment does not exceed 2.5-3 lots.

In the period 2017-2018, the pair moved in a wide flat (about 6 figures), but the strategy managed to provide a margin of safety, and on speculations in 2019, the account practically did not lose profit.

There are very few deals, especially on H1, but this means that the technique successfully ignores short-term speculative throws. Drawdown in the profit zone, statistics are excellent. 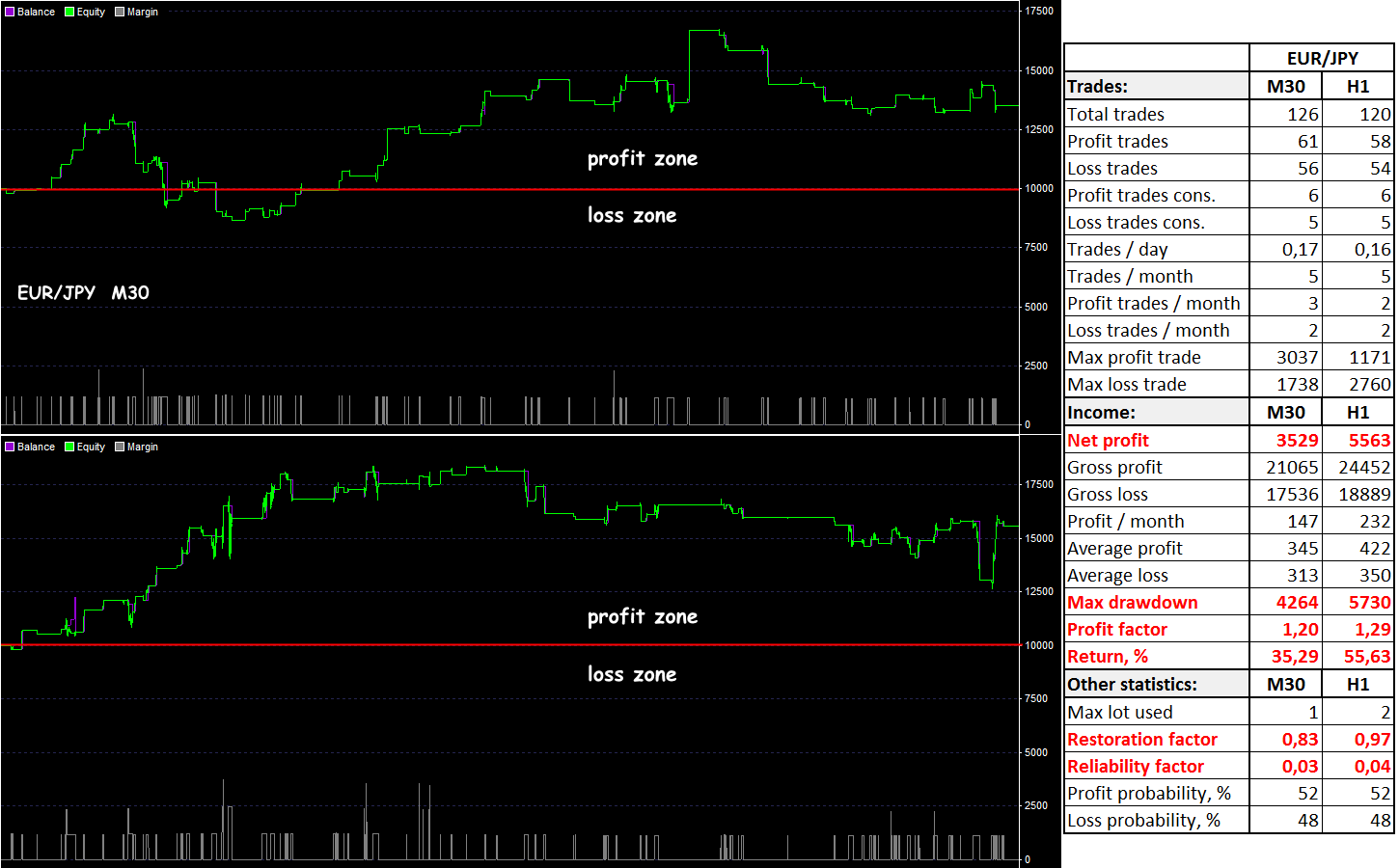 Risk analysis: the risk is minimal, but there are moments of load growth up to 2.5-3 lots.

The speculators “run away” in this particular currency pair during fundamental problems with Asian assets, so its volatility is unstable. For example, in the last week of 2018, the range of the course was almost 8 figures, but the score lost almost nothing.

The strategy showed a very stable result, although part of the profit on the M30 was lost at the beginning of the test. The maximum drawdown is in the profit zone; there are only a few transactions were conducted, but the statistics are excellent.

We remind you: manual trading during the test was not allowed.

All tests showed a few deals, which is uncharacteristic for the oscillator strategy. It means that the mutual filter of indicators has proven effective. The ratio of transactions in almost all tests is in favor of profitable ones, which indicates high accuracy of entry.


Like all oscillators, Stochastics can freeze for a long time in critical zones, and a lot of false signals will appear on periods up to M30, so the technique is unlikely to be useful to scalpers.

It is necessary to take into account the behavior of the slow oscillator lines. If they have been, for example, in the oversold zone for a long time, and have crossed several times in it, then it is better to open a long position only after the lines not only intersect but also exit it.


The strategy worked well as a medium-term one; in all respects, the most profitable option was AUD/USD on H1, the weakest, as expected, GBP/USD. 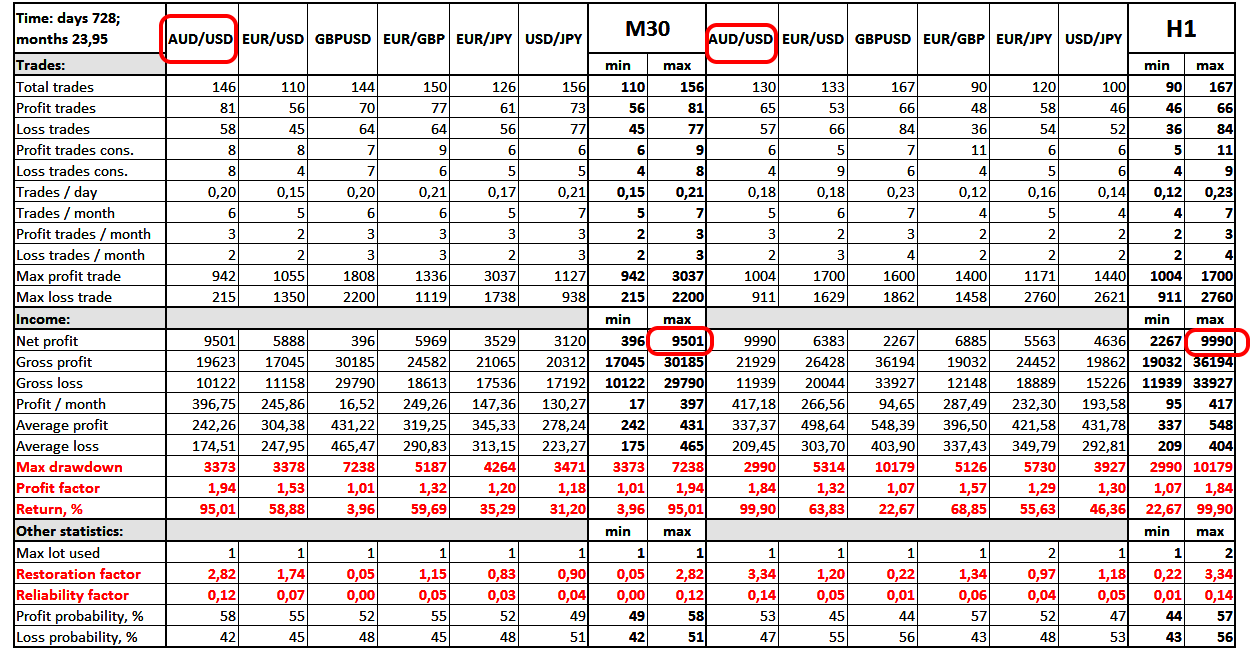 There are no particular restrictions on timeframes and assets, you can even try binary options (expiration time - at least Н4), but extra experiments are not recommended.


In this test, as additional risk insurance, besides the stop orders, a reverse method of closing deals was used when a return signal appeared. Consequently, some transactions were closed with a minimum profit, which somewhat reduces the overall result. We offer readers to check the option without reverse by themselves.