Forex Pennant Pattern: how to bend with the wind

Some analysts do not distinguish Pennant as a separate pattern. It is alike the Triangle figure by the support/resistance line diagram, and the presence of the flagpole along with the formation principle resembles the Flag model, in which, instead of a uniform flat in the “panel” zone, the price range gradually decreases.

Nevertheless, it will be useful to us as a separate trading scheme, so - let’s get started.

The fundamental conditions of the Pennant pattern


The appearance of Pennant is a strong signal that the rapid movement of prices led to an imbalance in volumes, and an overbought/oversold situation is formed on the market.

Most often, it happens as a result of market manipulations, for example, news release or stops removal in the area of the strong price levels.


A horizontal Pennant means approximately equal strength of bulls and bears, a bullish or bearish means the predominance of a little open interest in the corresponding direction.

A technical break is required (short-term consolidation), after which the market will continue to move in the direction of the main trend. The appearance of a similar model is worth checking on the higher timeframes.

Technical parameters of the Pennant pattern

In the real market, it’s difficult to recognize such alike models. But ultimately, Pennant and Flag should complete the same way, and the working out of a symmetrical Triangle should be evaluated using additional parameters.

The model is clearly visible after the formation of the trend lines: resistance and support gradually converge (see Using Graphic Tools).

Let’s take a closer look using the diagrams below. 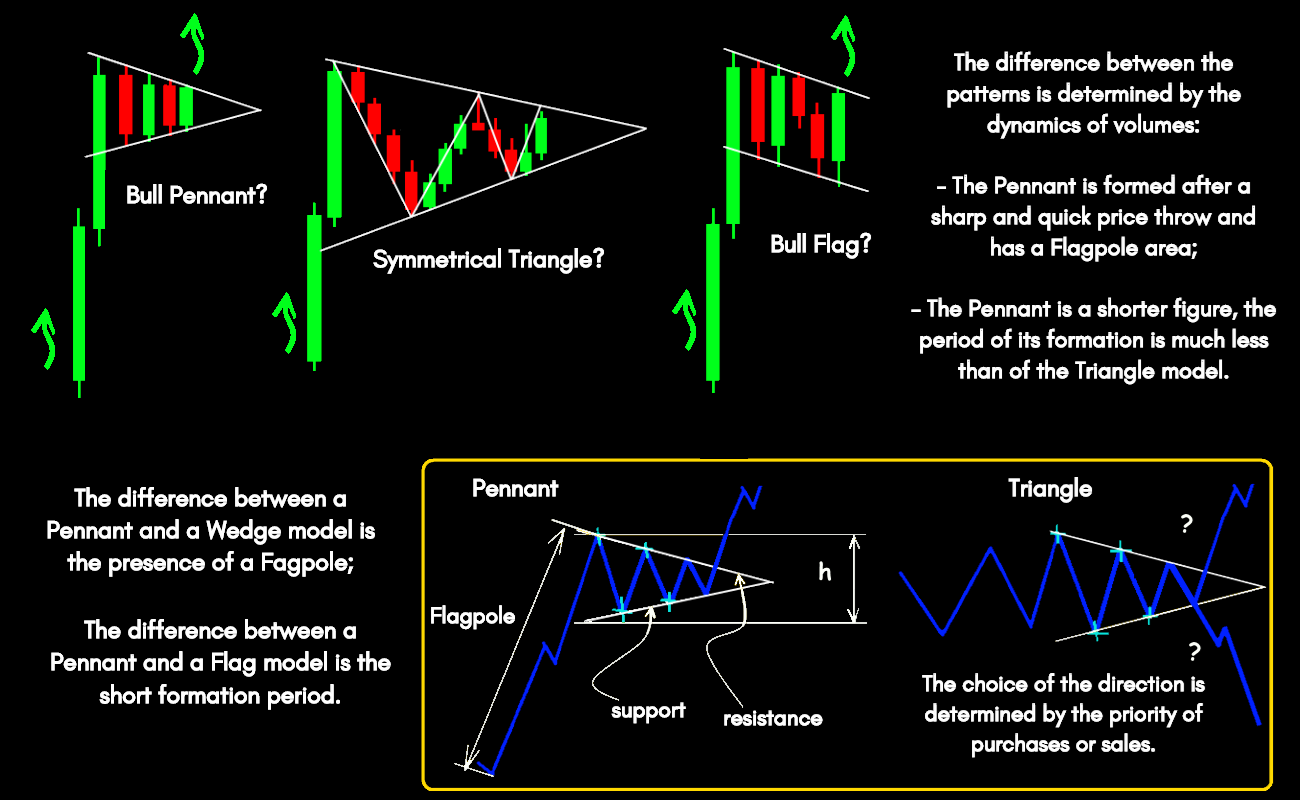 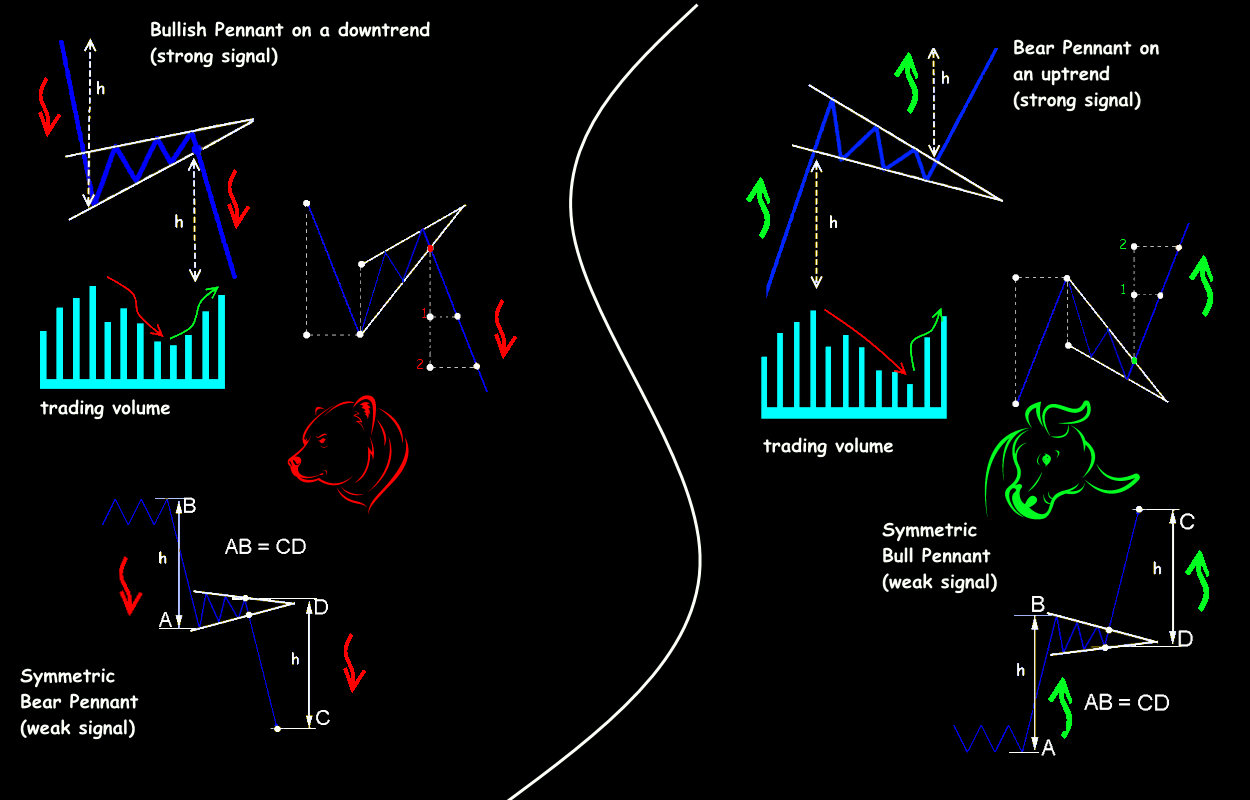 Standard version of the Pennant pattern

At least 2-3 waves should form in the area of Pennant’s main “panel”, but before the price reaches the potential border crossing point, a breakdown should occur. If the price has passed the top of the figure and then moves in the flat, then all trading signals of the pattern are canceled.


Any Pennant is formed and worked out quite quickly, usually during the periods of M5-M30. Therefore, medium-term and long-term methods do not pay due attention to it.

Practice shows that the Pennants most often appear on habitual, medium-volatile trading assets, moreover in the middle of a trend and in a downtrend. So it is not recommended to ignore this model completely.

In fact, Pennant is a trend correction, albeit not always pronounced. It means that a strong condition for the model to be worked out effectively will be the accumulation of volumes at the breakdown point.

The initial trend for Pennant formation is usually weaker than for the Flag. If the pattern forms a slope towards the main trend, then the probability of its development will be low (see Using Indicators).

Classic Signals of the Pennant Pattern

If you are not sure, you can put a bunch of orders (in both directions), since the probability of a breakdown and working out of the Pennant according to the scenario of a reversal wedge is very likely. 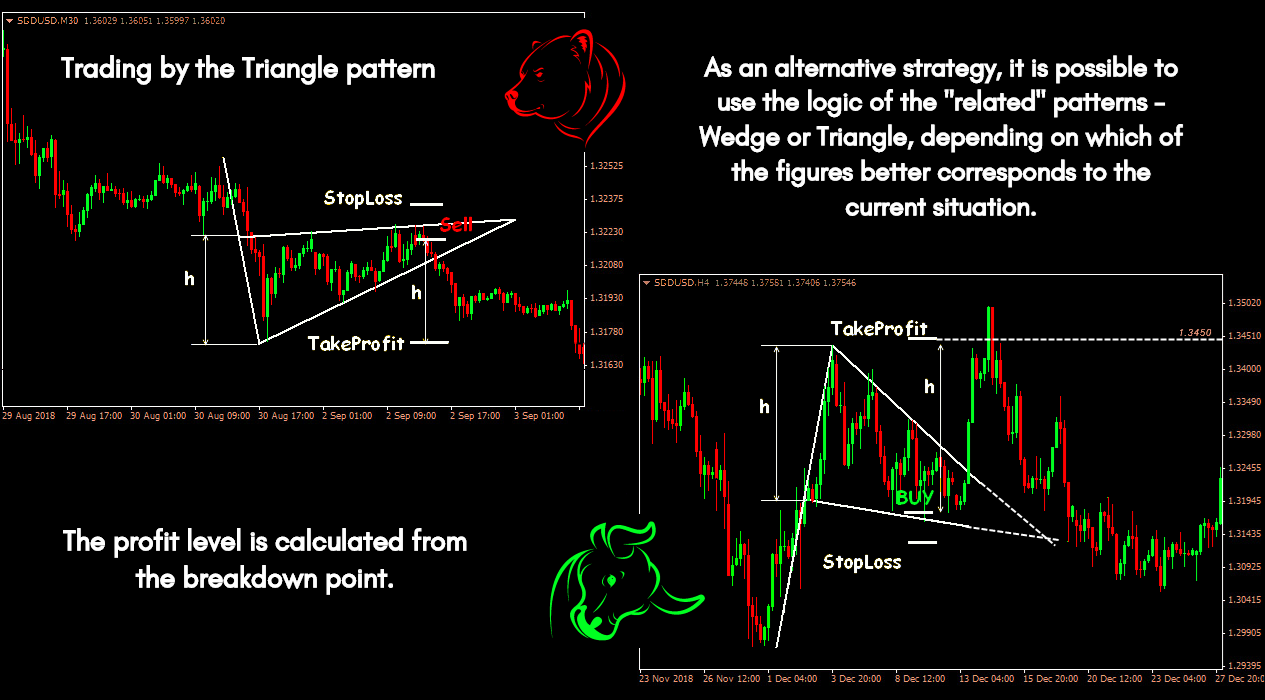 It may be difficult to determine the level of take-profit, as a rule, the flagpole is fully practiced quite rarely. It means that you need to set a profit on prices that are justified by the usual trading logic: Fibo levels, round levels, new max/min, or in the profit/loss ratio according to money management. 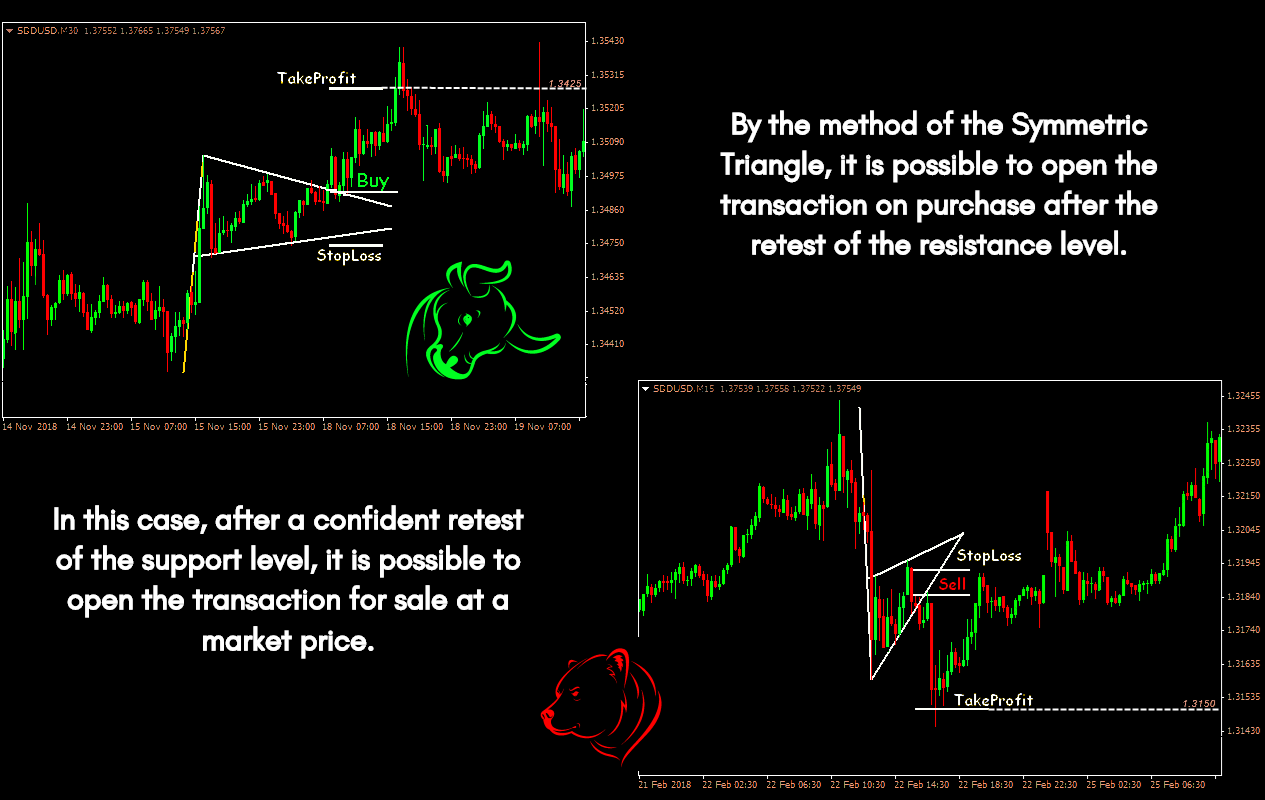 The classic pattern is rare, but its shortened version (impulse-rollback by 30-35% continuation) is a typical situation on the market. For a more accurate calculation, a shortened flagpole is used - from a significant power level of resistance/support to max/min figures.

If the Pennant is directed towards the current trend, then the probability of its development is greatly reduced. It is worth waiting for a reversal, not a continuation of the trend.

Pennant up on a bull trend: a reversal signal of a medium-strength, but if the price breaks through the resistance level and moves up, then a weak signal appears for trading in the direction of the previous trend.

The breakdown of the upward Pennant on a bearish trend up: we do not trade on the main trend; we are looking for additional signals to confirm the reversal.

For the downward Pennant, we reason similarly:

If it appears on a bearish trend: we are waiting for a reversal, even if the border of the figure is broken down - the sell signal appears weak. If the bearish Pennant breaks down on an uptrend: short positions are not recommended; we are looking for confirmation for a reversal on the purchase.


What is the result?

Pennant pattern is a short-term correction of the ongoing trend. The development of the model must be monitored by volume (at least tick!): during the flat period, the volume should gradually decrease and grow closer to the breakthrough.

At the moment of breakdown, volumes give a sharp throw, usually in the direction of a breakthrough, but when working out large orders, the price can quickly roll back. For the formation of Pennant, 5-15 candles are enough, and the breakdown usually falls on the last third of the “panel” zone of the figure.


We remind you: all the arguments regarding this model are related to a stable market, it is assumed that the speculations that formed the flagpole are already over.

If the market continues to be nervous, there is no decrease in price amplitude, and volumes do not show the desired dynamics, then you should not even look for such a pattern.